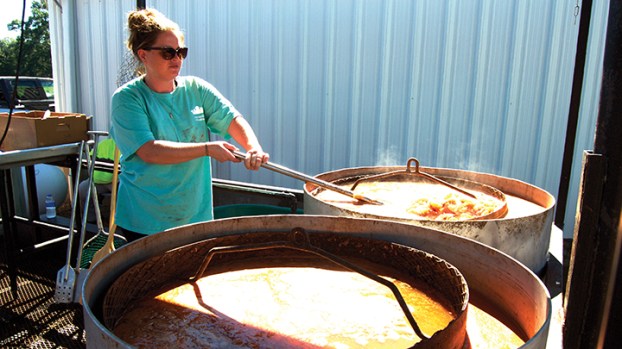 The boil is back.

Members of the Junior Auxiliary of Brookhaven are already selling tickets for the 31st annual Peel ’Em and Eat ’Em Shrimp Dinner, although it’s not for four more weeks.

Tickets go quick, said Sheila Sartin, this year’s shrimp chairwoman. About 4,700 tickets were sold last year and, after plates are donated to firefighters and police officers, there are only a couple of hundred or so plates left to buy that day, she said.

The event is Oct. 18 from 3-7 p.m., and plates are pickup-only at the Lincoln Civic Center. Tickets are $15 and can be purchased from any JA member or by calling the ticket hotline at 601-754-3507, which rings straight to Sartin.

She expects they’ll have the usual 5,000 pounds of shrimp boiled in the shell and plated for pickup. Each plate gets a pound — precooked — of boiled shrimp prepared by K&B Seafood, baked potato salad, spicy corn on the cob and crackers with cocktail sauce.

“Most people in Brookhaven are eating shrimp that night,” she said.

The money raised from the dinner is used to fund JA projects such as Wish Tree, Smile Games for special needs students, Reality World for ninth-graders, Crown Club, community assistance and scholarships.

“The shrimp dinner is the Junior Auxiliary’s only fundraiser,” said JA President Brenda Orr. “Money raised is used to fund numerous projects. The community’s support of shrimp dinner allowed us to serve more than 2,200 children in Lincoln County last year.”

Besides shrimp plates, the JAs are again offering sugar highs for those with extra cash to spend. At the Sweet Shoppe bake sale, home-baked goods from full-size cakes to individual servings are available for purchase by cash or check. Many are made from treasured JA recipes, like the Mississippi mud cake, which has been a staple of the Sweet Shoppe for all 31 years.

“The Sweet Shoppe was a huge success last year. We sold out early, so this year we are adding new recipes,” Orr said.

Sartin said one of the JA members is a baker and has kicked up their menu a notch.

“We will have some new items at the Sweet Shoppe. Some new recipes, some new cakes we’ll try,” she said. “It was a sellout last year. We had more items than we ever had. It’s an addition that everybody looks forward to.”

After three decades of shrimp-boiling and selling, the JAs have the process down to a science.

On the Tuesday before the big day, the women set up their stations. On Wednesday, K&B comes in and cooks the shrimp using their big rig on-site. JAs pick out the smaller ones and pack the rest into 10-pound bags, which are put back on the refrigerated truck. K&B cooks the corn, too.

K&B donates their services to cook the 2.5 tons of shrimp for the Junior Auxiliary. They boil the corn in seasoned water at their shop and bring it over.

Members start at 8 a.m. on the day of the event. They pray first, then plate. Once the take-out containers are packed, they go back on the trucks until its almost time for pickup to start. Then they’re brought out continually as needed.

The 47 active JA members get a lot of help that day — life members, husbands, significant others and members of the Exchange Club of Brookhaven all pitch in.