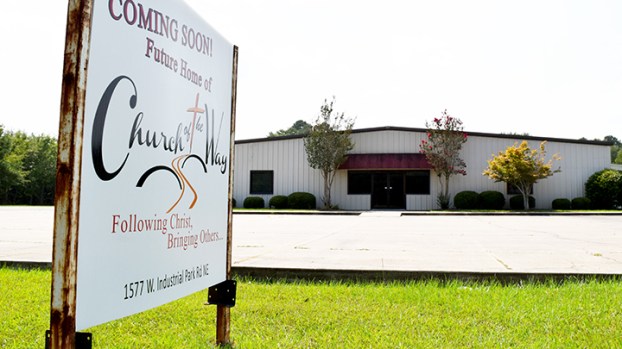 Photo by Adam Northam/Church of the Way will remodel the old Bardwell Yamaha building on West Industrial Park Road and move into it in just a couple of months.

Church of the Way is moving

He says he’s pretty good with a hammer and a measuring tape, and he’s been waiting to mark off feet and inches at the old Bardwell Yamaha building for six years.

In a couple of months, Mike Knight’s church — Church of the Way, at Brookhaven — is moving there, and he and everyone else is on the remodeling crew.

“God has planned for us to have that building, even years ago,” said Knight, owner of Knight’s Meat Market and a Church of the Way elder. “It was open before, but at that time we had just started up, and CenterPoint Church moved in there. But now it’s available again — it’s his will, and we had to wait on his timing. We’re excited to see what God’s going to do with the new building.”

Church of the Way Pastor David Fortenberry said his congregation is up to 120 members, and the church’s little campus at West Congress Street, at the edge of Exchange Club Park, can no longer contain them.

So, the church has taken out a $568,613 loan from Bank of Brookhaven to buy the old Yamaha building on West Industrial Park Lane Northwest, just off Hwy. 550, where its growing congregation can fit easily into the 19,000 square feet contained within the property’s four buildings.

“We’re going to have plenty of room for expansion to offer some ministries we don’t have room for in the current building,” Fortenberry said. “We want to do some children and youth ministries, and we’re gonna be reaching out to the community, that’s for sure.”

Fortenberry said the church is still a couple of months from being ready to move into its new campus — he hopes to begin holding services there in November. In the meantime, the congregation will be working on roof repairs to the main facility, constructing a main stage in the sanctuary and installing the lighting and sound equipment.

The workers will also be renovating classroom space for the youth ministry and general refreshing, all of which Fortenberry wants to have completed before making the move. One of the buildings at the new campus houses a commercial kitchen and will be renovated into a fellowship hall in the future, he said.

This will be the third move for Church of the Way, which formed as a non-denominational gathering in 2012 and rented the Woodmen of the World Lodge for two years before purchasing its current building near Exchange Club Park.

Fortenberry — a former insurance salesman who began pastoring 20 years ago and also owns Backwoods Bayou restaurant in Loyd Star — said he isn’t worried about the size of the loan to which his church is committed.

“What the Lord orders is big enough to pay for,” he said.

Archery season for whitetail deer starts in 38 days. The sounds of the guns will fill the woods a few... read more