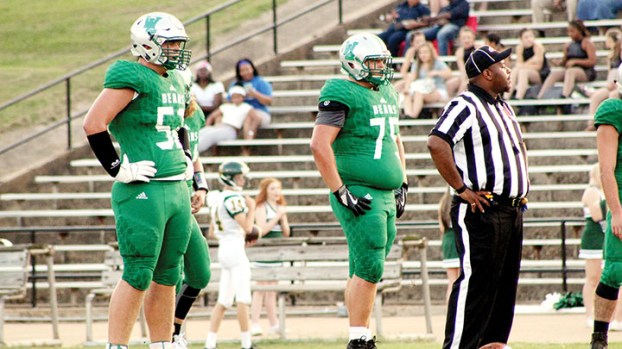 The fence-line around the track on King Field was elbow-to-elbow on Friday night. The visitor bleachers were full 30 minutes before game time and the standing room was three-deep in places when Lawrence County kicked off to start the game.

In the first nine minutes of the game the Brookhaven Panthers (1-1) scored twice and caused a Lawrence County (1-1) turnover and punt. The lead was 14-0 — not an insurmountable deficit — but it felt like more than Lawrence County would be able to make up on this night. Brookhaven wasn’t flawless, but they were very good on both sides of the ball in a 33-6 win over the Cougars.

The Panthers operate out of a shotgun formation and the chemistry between quarterback Sevante Quinn and running back JQ Edwards is what makes their offense go. Quinn knows when to leave the handoff with Edwards, his powerfully built 5-foot-8 175-pound backfield partner.

When Quinn pulls the ball back, the defense never knows if he’ll try to beat them with his arm or feet. He’s always looking to feed his go-to receiver — 6-foot-1 184-pound wideout John Hilbert ­ when scrambling.

Brookhaven hosts an improved South Pike team on Friday. The Eagles (2-0) are averaging 44 points a game but have not played a defense this year as strong as the Panthers.

Speaking of big crowds, there will be a sea of Cougar blue at Red Stuard Field when the Brookhaven Academy Cougars (1-0) make their home debut this week. The Cougars host Clinton Christian (2-0) in their district opener.

Brookhaven Academy is coming off of a tough road win over the North Delta Green Wave (0-2). A goal-line stand just before halftime ended up being a huge factor in the game. The Cougars found enough offense in the second half to get out of Batesville with a 21-13 win over their AAA opponent.

Defense was also the difference in the West Lincoln (2-0) and Salem (1-1) game in the KDMC Kickoff Classic. The Bears were down 28-20 at halftime before shutting out the Wildcats in the second half on their way to a 38-28 win.

Salem will travel to Loyd Star on Friday to take on the Hornets (2-0). The Hornets are averaging 46 points per game in this young season after beating McLaurin 47-33 last week. A win will move the Hornets to 3-0 for the first time since 2009.

Enterprise (0-2) also pitched a second half shutout in their week two game, unfortunately their offense couldn’t get much going against the Puckett Wolves (2-0) in a 31-0 loss.

Enterprise hosts Richton (1-1) in their home opener this week. Richton was throttled in week one by Columbia but bounced back last week with a 42-20 win over Sacred Heart.

Puckett will host West Lincoln on Friday in what will be the biggest game involving an area team.

For a small school in Mississippi, Puckett has long been the bar of what your football team strives to be. Their 2008 state championship team was an all-time great team. A small, rural community school that turns out blue-collar teams year after year, it’s what every 1A-2A school dreams of.

After a down year last season, the Wolves appear to be back. Their running back and quarterback are both dynamic sophomore athletes.

However, this isn’t your father’s West Lincoln.

In year 20 of football at Flea Hop, the Bears look better than ever. The offensive and defensive lines are big and physical, there is depth in the skill positions, and Michael Brothern is a wrecking ball that plays running back.

Wesson (0-1) travels to Bogue Chitto (0-2) on Friday for a game that should attract a big crowd. The Bobcats are making their home debut after going to Mobile, Alabama, last week and taking a 55-6 loss to the much larger Faith Academy Rams.

Wesson head coach Jeremy Loy isn’t one for moral victories, but the performance of his team last week against Sumrall is something he’s proud of. The Cobra defense did yeomen’s work against the Bobcats, but a physical front seven from the Bobcats kept the Wesson offense in check. The Cobras got two kickoff return touchdowns and a safety in an 18-15 loss to the Bobcats.

Lawrence County also makes their home debut on Friday when they host the Raleigh Lions (1-1).

A Lawrence County fan standing on the fence at King Field on Friday night was receiving a hard ribbing from some Brookhaven fans. The Panther lead had grown, and the man had placed a losing wager on his Cougars to come out victorious.

The look on his face and positivity in his message can be a lesson to all area fans this week, especially those still looking for a win.

“We’re going to be alright. Tonight just wasn’t our night. I still believe in these boys,” said the smiling Cougar fan.