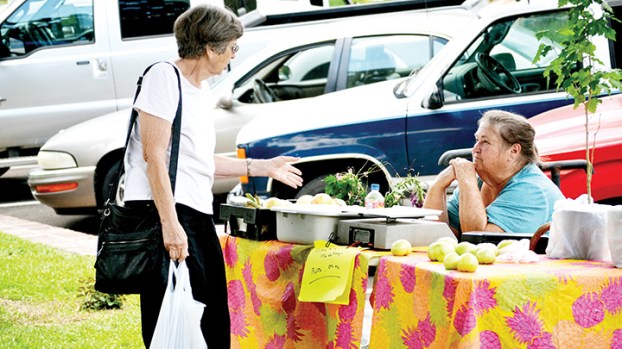 The fall farmers market will begin in early October — if it begins at all.

Lincoln County Extension Agent Rebecca Bates said she would meet Brookhaven Farmers Market producers Sept. 10 to see the results of the late-summer growing season, and based on their “go” or “no-go” responses she’ll set the dates for the approximately six-week run of the fall market.

“We’ll discuss having a full-fledged fall market, but we won’t know until then,” she said. “We need to take a look at how much produce will be available. We don’t know as a group what produce availability will be, and we don’t want to open up the market without enough produce. I’ll meet with my growers and other vendors to take a look at how their crops are doing and what they think they will have available.”

If the fall market is a “go,” it will open Oct. 5 and run through the annual Thanksgiving Market on Nov. 20. The fall markets are open from 7:30 a.m. until lunchtime in Railroad Park on Fridays — the Tuesday markets at the Amtrak station are not held during fall market.

It all depends on a handful of producers.

Bates said almost 100 local growers and vendors are on the market’s mailing list, with some coming and going throughout the summer selling season, but the dedicated core group who keep the market going each year numbers only around 15 members. Of those 15, only three or so are every-Friday vegetable growers.

“We need more produce vendors,” Bates said. “You can’t have too much produce at a farmers market. That’s always the limiting factor.”

Bates said she works to recruit Lincoln County gardeners — of which there are plenty — but not everyone can make the commitment to run a booth at two markets per week during the spring and summer months.

She encouraged anyone growing a garden or planting fall vegetables to consider bagging up their excess and joining the farmers market.

“The most rewarding thing about a farmers market are the friendships that are made between customers and vendors, and among the vendors themselves,” Bates said. “And, it’s an added income. You can sell your produce at a wholesale price through different outlets, or you can come directly to the farmers market and get a retail price.”

The Thanksgiving Market will be held on Nov. 20, fall market or not.

The extension office is also preparing for its fall forestry gathering, which will take place on Sept. 18 at the Lincoln Civic Center. Hazlehurst attorneys Olen Bryant and Tim Rutland will give a presentation on land law, rights, leases, logging and other issues, while National Forest Service rangers will offer information on pine beetle control.

Dairy Calf College will be held at the extension offices in the courthouse on Sept. 20, and the Fall Flower and Garden Fest will take place on Oct. 12 and 13 at the Truck Crops Branch Experiment Station in Crystal Springs.

As the Lawrence County Fire District works toward a goal of a fire rating of at least an 8 in... read more