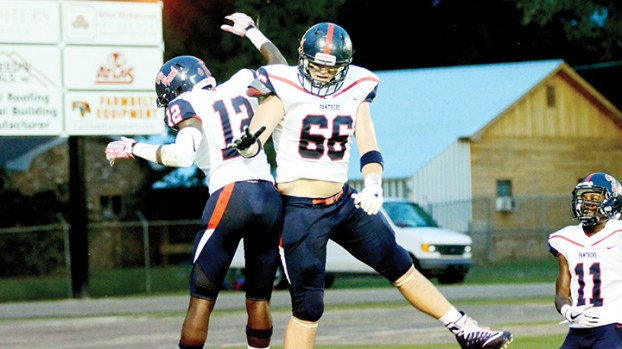 Brookhaven seniors John HIlbert (12) and Coker Wright (66) celebrate after a score in a previous game.

The Panthers are coming off a 33-6 win over Lawrence County. South Pike — like Lawrence County — is a former long-time district opponent of the Panthers that now resides in the 4A ranks. The Eagles topped Franklin County 44-6 in their season opener and outlasted their county rivals North Pike 44-42 last week.

A team that’s always been known for having a powerful ground game, South Pike has a dual threat weapon at quarterback in junior Dontavious Turner. Turner is 11-for-20 passing on the season for 226 yards and five touchdowns. He’s rushed the ball 23 times for 244 yards and one score.

“We’ve got to keep their quarterback hemmed up,” said Brookhaven coach Tucker Peavey. “He does a great job extending plays with his legs and we’ve got to be disciplined in our assignments.”

Peavey praises the job done by South Pike head coach Brinson Wall. Wall — the son of former South Pike and Brookhaven head coach Greg Wall — is in his third season as the head coach in Magnolia.

His first season the Eagles posted a 4-6 record before making a huge improvement of 10-4 in 2017. The Eagles made it to the third round of the playoffs before losing 70-32 to eventual 4A state runners up East Central.

Greg Wall coached Brookhaven for five seasons and led a Brookhaven team that finished 12-1 in 1997. He won state championships at South Pike in 1989 and 1992.

“They’re going to blitz and be aggressive on defense to try and cause confusion,” said Peavey. “They’re a very good football team.”

After a trip to Alabama, an aborted game in Natchez and a win last week in Batesville, the Brookhaven Academy... read more