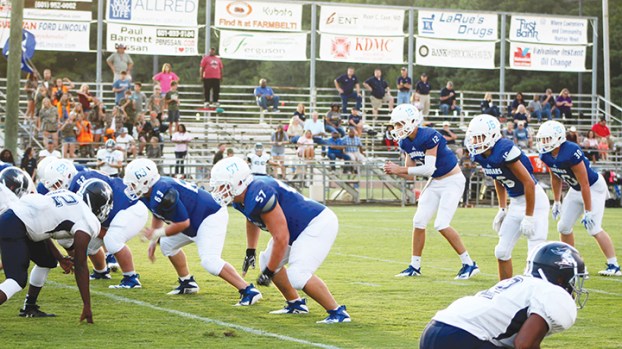 Photo by Cliff Furr/The Brookhaven Academy offense was unchecked in the first half against Clinton Christian on Friday as the Cougars ran out to a 28-0 halftime lead.

It was just a moment.

A strong, cool wind that blew across R.M. “Red” Stuard Field on Friday night that felt like — for the briefest instance — a taste of fall. It was gone as quickly as it came when the front that brought pre-game showers to the area passed through.

The boys of fall — or late summer as it goes in Southwest Mississippi — had a huge contingent of fans cheering them on at Brookhaven Academy as the Cougars opened district play against Clinton Christian.

There isn’t a sports complex in the area that has evolved more over the years than the football facilities at Brookhaven Academy.

The hill on the north side of the bleachers was a long-time play area for those children too young to care about a football game. It was reconfigured a few years ago and became home to multiple levels of concrete risers. The wide concrete pads that sit like steps on the hill are perfect for parking a comfy chair and watching the Cougars.

That viewing area was packed on Friday, and the fans got to see their Cougars finally get their offense clicking in a 38-8 win over the visiting Warriors.

Last season was a breakout one for Cougar quarterback Dawson Flowers. Playing his first year of varsity football, Flowers passed for 2,419 yards and 24 touchdowns for the 9-3 Cougars.

This season things haven’t been so smooth. The season opening game against Cathedral was rained out, and the next week the Cougars made a long trip to Batesville to face a stiff North Delta defense. But Flowers got his flow back on Friday as he went 12-for-17 for 232 yards and three touchdowns. He also added a rushing score.

“We had struggled with our timing, but Dawson is such an athlete and competitor that he’s worked hard to fix those issues,” said Rushing.

It was Clinton Christian that Flowers had his first big game against last season as the threw for a season-high five touchdowns in a 34-6 win.

BA (2-0) hosts a very good Sylva-Bay (3-0) team on Friday in their annual “Pink Game” that raises money and awareness for cancer research.

Loyd Star (3-0) is the only other area team that is undefeated after their 35-6 spanking of Salem. The Hornets have used a powerful ground game to wear their opponents down.

One of the best area rivalries resumes on Friday when the Hornets travel to Wesson (1-1). The game doesn’t have a nickname or a trophy that’s given to the winners. What it does have is a history of very good games that always had high stakes when the two teams were 2A district opponents.

During a time when each district only got two teams into the playoffs, Loyd Star versus Wesson — especially in the 90s and on into the next decade — was a game that usually decided the district champion.

Loyd Star and Wesson have both had to deal with a slew of early-season injuries, but both coaches know the season doesn’t stop when you lose a good player, and your opponent isn’t going to feel sorry for you.

Wesson (1-1) coach Jeremey Loy — coming off of a 49-12 win over Bogue Chitto (0-3) — expects another classic Loyd Star and Wesson slobber-knocker.

“Loyd Star knows what works well for them and they do a great job executing,” said Loy. “Our guys are going to have to accept the challenge of being physical to slow down their offense.”

Loyd Star comes into the game averaging 42 points per game.

Bogue Chitto (0-3) will wear the crown of being the first area team to celebrate homecoming this season when they host Mount Olive (0-3) on Friday. The Pirates have losses to West Lincoln, Mize, and St. Patrick.

Here’s hoping that homecoming queen Leslie Moak and her court get to see the Bobcats break through and get their first win of 2018 on Friday night.

Brookhaven (2-1) will conclude their trio of games against former district opponents when they travel to McComb (1-1) on Friday to take on the Tigers.

Last week the South Pike Eagles gave Brookhaven all they could handle in a 33-28 Panther win.

South Pike quarterback Dontavious Turner went 5-for-15 passing for 114 yards and ran the ball 18 times for another 153 yards. It took a huge defensive stand in the final minutes for Brookhaven to secure the win.

West Lincoln (2-1) will play their first true home game on Friday when they host Pelahatchie (2-1). The Bears fought tooth and nail with Puckett last week and only trailed 7-0 at halftime before things began to unravel in an eventual 28-6 loss to the Wolves.

Enterprise (0-3) goes to Lauderdale County seeking a win this week when they play Clarkdale (0-3). Clarkdale is located outside of Meridian and local fans might remember their place in county football history.

The Bulldogs were the team that West Lincoln beat for their first win in school history and are ripe for the Enterprise picking. The Bulldogs have scored a combined 12 points so far this season. Enterprise took a 51-6 beating from Richton last week.

The Lawrence County Cougars (2-1) host their second week of a three-game homestand when they take on the Bay High Tigers (0-3) Friday. Lawrence County got a great win last week when they beat an always-tough Raleigh team. The 17-0 victory saw the Cougars get a rushing touchdown, a passing score and a field goal. The Lawrence County defense held the Lions to two first downs in an outstanding showing.