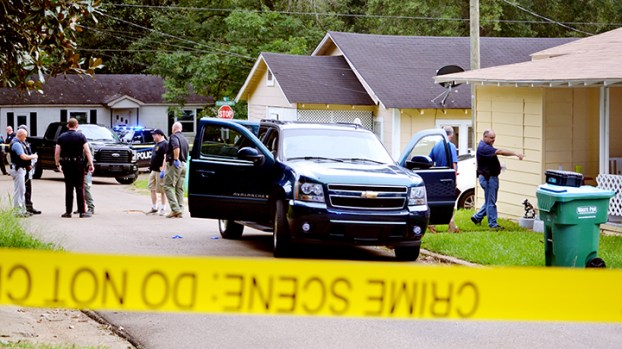 Photo by Donna Campbell/Brookhaven Police on-scene at a double murder and suicide Sunday.

The two victims and the suspect in a double murder/suicide on Wood Street Sunday have been identified by authorities.

Capt. Clint Earls, an investigator with the Brookhaven Police Department, said the victims are J.T. Miller, 61, of Raleigh, and his daughter, 19-year-old Taylor Nicole Kelly of 228 Wood St. Kelly’s husband, 29-year-old Byron Keith Kelly, of the same address, appears to have taken his own life after shooting to death his wife and father-in-law, Earls said.

“It appears the first victim was coming to pick his daughter up,” Earls said. “Whenever he got there, he made it to the front door, attempted to go inside and inform his daughter he was there, that’s when the first shot rang out.”

Earls said Miller fell back onto the front porch and died.

Miller’s wife, the woman’s mother, who was waiting in front of the house in a green pickup truck, got out and ran for help, he said.

When police arrived shortly after 4:30 p.m., they found the body of Taylor Kelly just inside the door and Byron Kelly nearby. He was holding a handgun.

Lincoln County Coroner Clay McMorris confirmed the named of the deceased. He said the bodies will be sent to the state medical examiner’s office in Jackson for autopsies.

When court is in session, Lincoln County public defenders and their clients meet in a small office in the hallway... read more