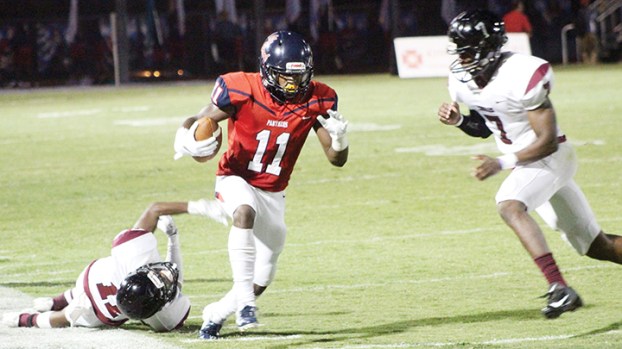 Photo by Cliff Furr/Brookhaven wide receiver Dorian German works back up field after making a catch against Lawrence County earlier this season.

The Brookhaven Panthers head south on Friday as they visit the familiar confines of C.C. Moore Stadium for a 7 p.m. kickoff with the McComb High Tigers.

The Tigers are in their first year under the leadership of head coach Willie Brown. Brown is recognizable to area fans, as he’s previously been the head coach at Hazlehurst and South Pike. Brown has also served as the head coach at Lanier, Moss Point, Greenville and Port Gibson. His 2005 team at Hazlehurst (13-0) won the MHSAA 3A state championship with a 14-0 win over Charleston.

Brown has always had teams that run the football, and Brookhaven coach Tucker Peavey says that hasn’t changed.

“They’ll line up in a Wing-T and have three or four good ball-carriers,” said Peavey.

The Tigers (1-1) had their season opener against Port Gibson canceled due to severe weather. McComb whipped Hazlehurst 39-6 to get their first win before losing 13-6 last week to Tylertown.

The schools have been playing each other since 1920. For a time in the mid-century the game was played on Thanksgiving Day.

Brookhaven and McComb were longtime district rivals, but classification shifts put the Panthers in 5A while the Tigers are a 4A school. It’s not unrealistic to imagine the teams might be in the same division again someday. Brookhaven was the third-smallest 5A school in the last round of reclassifications and McComb was the sixth-largest 4A school.

Brookhaven is coming off a thrilling 33-28 win over South Pike. The Eagles got the ball inside the Brookhaven 10-yard line in the closing minute, but the Panther defense rebuffed their game-winning attempts.

Peavey sees good size and depth on the Tiger defense. McComb is giving up 10 points per game so far in their young season.

The Brookhaven offense is balanced, averaging just over 154 yards rushing and 157 yards passing through three games.

“They look like the typical McComb team with great size and speed. It’ll be a good challenge for us,” said Peavey.

The Brookhaven Academy Cougars (2-0) will face a much-improved Sylva-Bay team on Friday when they host the Saints for a... read more