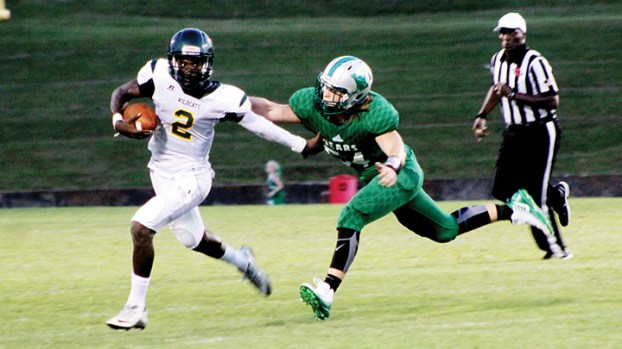 Photo by Cliff Furr/West Lincoln linebacker Tate Smith attempts to run down a Salem ball carrier in action from earlier this season.

The West Lincoln Bears (2-1) will face off with one of the most dynamic playmakers in the state tonight when they host the Pelahatchie Chiefs.

Mississippi State commit Javeious Purvis lines up at quarterback for Pelahatchie. The three-star athlete won’t play under center in Starkville — he also plays safety for his high school team — but his quickness makes him a threat every time he touches the ball.

“He’s not just an athletic guy running around and making plays,” said West Lincoln coach BJ Smithhart. “They’ll go four-wide in shotgun, and his ability to throw the ball on the move is something we’ll have to try and contain. He runs their offense well.”

Pelahatchie has wins over Lake and Richland, and a loss to Mobile Christian (Alabama) so far this season. Coached by Sam Williams, the Chiefs went 6-6 in 2017 and were 60-26 winners over West Lincoln last season.

West Lincoln is coming off a 28-6 loss to Puckett. In that game Puckett scored on the final play of the first half to take a 7-0 lead. The Wolves would then score on the first drive of the second half to stretch the lead to 14-0. West Lincoln responded with their only score of the night to cut the lead to 14-6, but would not be able to close the gap any further.

Mistakes, like a turnover on the opening drive of the game, are the kind of errors that Smithhart doesn’t want to see his team make.

“The game with Puckett was closer than the final score shows, but we didn’t make the plays it takes to win,” said Smithhart. “Going forward we’ve got to tackle better, especially in the open field. Pelahatchie has the kind of skill players that give people problems in the open field.”

The Chiefs are averaging 266 yards rushing per game, along with 163 yards passing. Purvis has thrown for just less than 500 yards and three touchdowns while rushing for 244 yards and two scores. Jamal Johnson and Ahmad Johnson are two other Pelahatchie rushers that have more than 200 yards rushing so far this season.

The game will be the first true home game for West Lincoln after the Bears played twice on the road and once in Wesson at Copiah-Lincoln Community College. Kickoff is scheduled for 7 p.m.