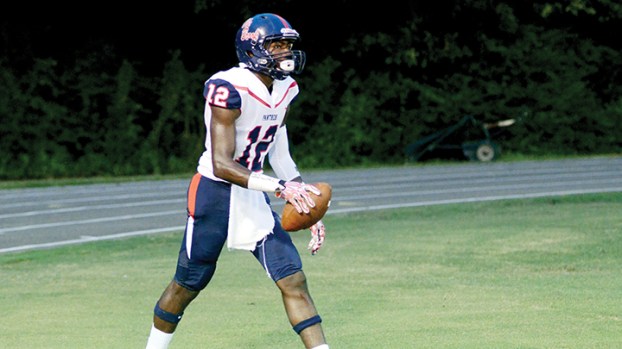 Daily Leader file photo John Hilbert had his hands on the ball for 100 yards and two touchdowns against McComb.

Hilbert bounces on opposing defenses — Offensive Player of the Week

When a cornerback attempts to get between him and the ball, the senior wide receiver bounces above their head to make the catch.

In a 33-3 Brookhaven High win over McComb last week, Hilbert — a senior wide receiver — grabbed six catches for 100 yards and two touchdowns. For that performance he’s been named The Daily Leader Offensive Player of the Week.

Hilbert has 26 receptions for 365 yards and four touchdowns this season. With seven regular season games remaining, he’ll soon surpass his junior totals of 31 caches for 525 yards and nine touchdowns.

Hilbert credits his connection with senior quarterback Sevante Quinn as a factor in his success.

“We’re like brothers,” said Hilbert. “We watch film together, we analyze the defense together, and when game time comes we know what each other are thinking and seeing.”

Hilbert has a knack for making the exceptional look routine.

At 6-foot-1 and 184 pounds, Hilbert is an ideal outside receiver. He’s fast enough to run past people, but physical enough to want the ball over the middle.

When Quinn scrambles, that’s where Hilbert is at his best. The quarterback is always looking downfield for No. 12.

“When he moves out of the pocket, I try to find the open space in the defense,” said Hilbert.

Hilbert is averaging 14 yards per catch this season. Last season as a junior on the basketball court, he averaged 7.7 points and 6.9 rebounds per game for the Panthers.

As far as recruiting goes, Hilbert says he has one offer from Mississippi Gulf Coast Community College, but is hearing from several other schools as his season progresses.

With his team off this week, Hilbert says the Panthers are gearing up for the most important part of their season, region play.

“We’ve got some big games left, like North Pike, Natchez, Laurel and West Jones,” said Hlibert. “We’ve got to keep working day by day to improve so when we play them we’ll be ready. We’ve still got goals left that we want to reach.”

Brookhaven Bass Club fished its ninth tournament of the year Saturday at Deer Park. Out of 16 dedicated anglers only... read more