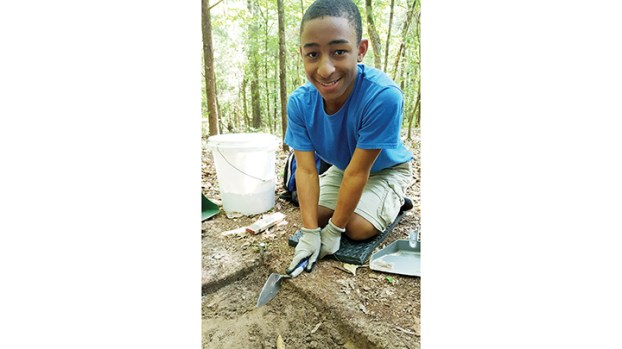 Photo submitted/Brookhaven High School senior Rodney Bridgeforth searches for artifacts on a dig held on the property of Benny and Gena Roberts in Copiah County. Bridgeforth is a member of the school’s archaeology club.

Even though she’s graduated, Chasity Hutchison digs coming back to her high school to look at rocks.

Hutchison, a freshman at Southern Miss, will be attending the Brookhaven High School Artifact Show Saturday to see what her former classmates have dug up lately.

The show is free and open to the public. It’s open 10 a.m. to 2 p.m. in the dance studio on the west end of the high school’s main building.

Representatives from the Mississippi Archaeological Association will be on hand to answer questions. Local collectors from Lincoln, Franklin and Lamar counties will also be attending.

Hutchison is a founding member of the club, which started in her senior year.

History and economics teacher Krista Russell organized the club last year. She said she’d seen the destruction of Native American mounds and artifacts “with little regard to their historical significance” so she wanted to expose as many people as possible to this part of history.

“I knew that I would not be able to influence many people, but just a few each year is a step,” she said. “In turn, they tell people what they have learned, where they have been, and what they have seen — so they influence more people.”

The members of the club held their first dig in December just outside of Hazlehurst on property owned by Mississippi Archaeological Association members Benny and Gena Roberts. The Robertses have volunteered at many digs in various states over the last 13 years and invited the students to come learn the proper techniques of digging a site.

Through their participation in the club, students have learned how to measure coordinates and plot locations on a topographic map, and measure a one-meter-square outline and drive nails to lay out their sites. They’ve learn to water-screen, mark locations, measure the depth below the surface and record the data to be mapped.

The students meet about once a month on a Saturday and often take field trips to get hands-on experiences.

The club has gone on about half a dozen digs and hosted as many speakers at the monthly meetings.

Hutchison tries to make it back for the presentations and the digs. Although she’s studying business entrepreneurship, archaeology “will always have a soft spot,” she said. “It’s interesting to see just how much we as the human species have evolved over the years. We should try to understand our past selves to better our present selves.”