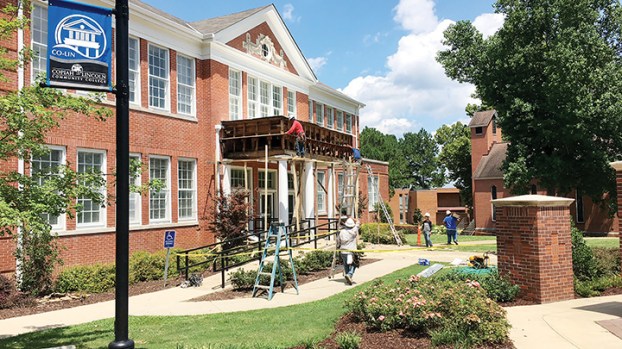 Photo submitted/A crew works to repair a portion of the administration building on the Wesson campus.

Hulon and the faculty, students and staff of the college’s three campuses are celebrating the changes that have occurred in the 90 years since Sept. 10, 1928, and the first day of class began at Copiah-Lincoln Junior College and Agricultural High School — and looking forward to the future.

“I want to make sure that we’re not only changing, but Co-Lin is growing,” she said. “I think it’s very important that people know what we do in order to help support us as we grow.”

To celebrate 90 years of history, the college recently held birthday festivities on each of its three campus — Wesson, Adams County and Simpson County.

Hulon is presently at the helm.

The college officially changed the name from Copiah-Lincoln Junior College to Copiah-Lincoln Community College in 1988. The Natchez Campus was established in 1975 and the Simpson County Center was built in 2005. The college now has over 60 buildings, 525 acres, and serves an annual enrollment of approximately 3,100 students.

Co-Lin is no longer just being a place to go for two years before continuing the pursuit of a four-year degree at a larger university.

“Our mission is very diverse,” Hulon said. “We’re charged with academic instruction, career and technical instruction and we are also charged with economic development services for our district. So we work with business and industry every single day to send them workers in the form of graduates but also to help train their workers that they already have on the payroll and make sure they have the skills that they need to make sure their company is successful.”

Hulon wants to build upon the solid foundation that was built over nine decades and continue to move the college forward.

“I think that there’s just so much to be done,” she said. “I’ve told the faculty and staff that we’re all on a journey together and we’re moving to the next chapter of the college. I’ve always heard the journey of a thousand miles begins with one step and so we are well on our way to moving Co-Lin forward.”

She said the administration is constantly seeking to identify programs and courses that will help move Co-Lin’s students into the future.

“Some of them will go to work in jobs that aren’t even created yet,” she said.

Hulon established five presidential priorities at the start of this school year:

Men with hammers and nails and hardhats may soon shatter the silence in the Wesson Public Library. And nobody’s going... read more