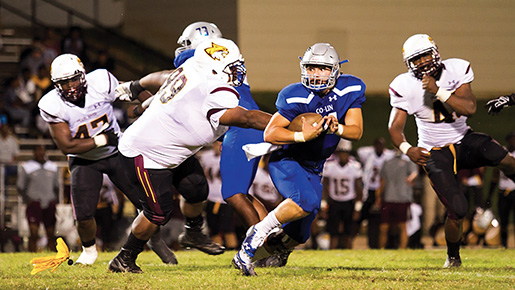 Photo by Natalie Davis Co-Lin quarterback Hayden Davis finished 13-of-14 passing for 155 yards and four touchdowns in a 49-0 rout of Pearl River.

Co-Lin the place to be Thursday

If the Copiah-Lincoln versus Pearl River football game had been a street fight, you would have called the coroner before you called the cops.

The Wolfpack went nuclear in the first half on their way to a 42-0 halftime lead and a 49-0 win that featured a running clock in the second half. The shutout on Thursday night in Wesson had to be a gratifying for Wolfpack defensive coordinator William Jones.

The highlights for Co-Lin are too numerous to list, but a touchdown catch by freshman wide receiver Malik Heath that came with less than one second left before halftime looked like something out of a video game.

The Wildcat defense was in prevent, as Co-Lin was 34 yards away from the end zone. The nearest defensive back was 10 yards off Heath.

Quarterback Hayden Davis delivered a short pass to his receiver and then Heath went to work. The former Mississippi State signee jumped back, juked sideways and made the Wildcat defense look absolutely silly on his way to the end zone. Four different Wildcat defenders touched Heath as he worked towards the end zone and away from their tackle attempts.

Co-Lin head coach Glenn Davis has said that this group of receivers might be the deepest he’s ever coached. If you know Davis, you know he’s not one to exaggerate.

That’s not even mentioning Franklin County product DeMartre Collins, who leads the team in receptions, or freshman Antoine Robinson of Canton, who has caught a team-high four touchdown passes.

On Thursday the Wolves host the No. 5 Northwest Mississippi Rangers. Northwest hasn’t visited Wesson since the 2014 playoffs, when they were defeated 44-30. The Rangers are led this season by quarterback Jacob Free, a Vanderbilt transfer.

The alumni association is hosting a community tailgate starting at 5:30 p.m. until kickoff outside the stadium. Pulled pork sandwich plates sponsored by Lincoln County Farm Bureau are $5 for the public and free for members of the alumni association.

Area fans have no excuse not to pack Stone Stadium, as the game in Wesson will be the marquee matchup on the MACJC schedule this week

It will also be one of only three area home games that they can see this week.

for high school teams this week

Brookhaven returns to King Field after being off last week. The Panthers host North Pike to kick off Region 3-5A competition. The Panthers are defending region champs after posting a perfect 7-0 region record last season.

The only other area home game takes place at Bogue Chitto, where the Bobcats will look to make it three wins in a row when they host the St. Patrick Fighting Irish.

The Bobcats got 151 passing yards from quarterback Shaw King and two rushing touchdowns from Jermaine Black in a 43-22 win over Salem last week.

Brookhaven Academy continues their tour of Louisiana this week when they travel to take on Silliman Institute in East Feliciana Parish.

The Cougars had a week to remember — and to forget — last week against Ben’s Ford Christian School. The negatives included the weather, which delayed the start of the game for an hour. When the game started the Cougars didn’t have a problem scoring, but gave up far more yards than anyone expected.

The Eagles had scored eight, 13 and zero points in consecutive losses to Bowling Green, Amite School Center and Centerville, respectively.

Fortunately for Brookhaven, they got three kickoff return touchdowns from Cade Brown and four rushing scores from running back Nick Ogden. The Cougar defense shutout Ben’s Ford in the second half after Eagle quarterback Tyler Winstead led his team to 28 points in the first half.

Most area teams are in their final week of non-region play this week, and that includes the Loyd Star Hornets, who travel to Sand Hill on Friday for a matchup with the Pisgah Dragons.

Loyd Star found themselves in a large hole to the Stringer Red Devils last week as they trailed 34-7 at halftime. The Hornets would play better in the second half, but the Stringer lead was too much to overcome.

West Lincoln can testify that Pisgah is no pushover, either. The Bears only trailed the Dragons 14-12 on Friday at homecoming in Flea Hop. Pisgah would push all the right buttons in the second half as they cruised to a 37-12 victory.

West Lincoln travels to Stringer this week to see if they can exorcise the Red Devils.

Wesson will be highly favored again this week as they travel to Smith County for a matchup with the Mize Bulldogs.

The Cobras capped their homecoming week with a dominating 47-14 win over Richland. This will be the final tune-up for the Cobras before they begin play in the formidable Region 8-3A.

Formidable might also be an adjective used by Lawrence County coach Jesse Anderson to describe his team’s opponent this week — Collins.

The Tigers are a 2A powerhouse located just 40 miles east of Monticello. The only blemish thus far for Collins is a five-point loss to Jefferson Davis County.

Lawrence County is riding high on three-game win streak that saw them win by a combined margin of 65-7.

In their 28-0 win over Franklin County last week, the Cougars got 182 yards and a touchdown on six carries from sophomore Tae Cole.

With only five teams in the local 2A region — Region 7 — all of the teams usually have a mid- to late-season bye week.

This week the bye goes to Enterprise. For the last two consecutive weeks the Yellow Jackets have dropped games that they have led until the game’s final minutes. Their latest heartbreaker came to McLaurin, 19-16.

Enterprise will take this week to rest and regroup before they host the Mize Bulldogs for homecoming.

As the unofficial Lincoln County high school handicapper, be advised that I’m picking the Yellow Jackets to wrap up homecoming in two weeks with their first win.