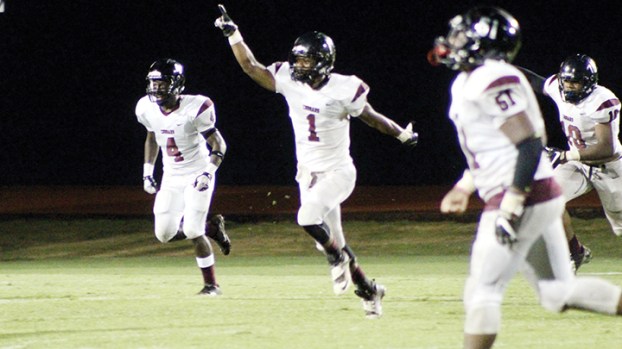 Photo by Cliff Furr/Defensive Player of the Week Jerome Dudley of Lawrence County (No. 1) celebrates an interception against North Pike in the season opener.

Defensive Player of the Week is quarterbacking the defense

Jerome Dudley didn’t play a lick of defense in 2017.

He was the quarterback for the Lawrence County Cougars and his team needed him to score touchdowns, not make tackles.

As a senior Dudley has traded one side of the ball for the other. Now a defensive back, against Franklin County last week he made six tackles (two for a loss), broke up two passes, grabbed one interception and blocked a kick in a 28-0 win over the Bulldogs. For this performance Dudley has been named The Daily Leader Defensive Player of the Week.

To watch Dudley work on the back of the defense as a safety, it’s easy to see quarterback attributes in him. He patrols the field and points his teammates into their correct position. If the offense is showing run, he walks up towards the line to provide an extra body in the box. He has the responsibility of never letting a wide receiver get behind him.

Dudley saw his junior season under center get cut short by an injury, as the Cougars finished 3-8. During the spring new coach Jesse Anderson approached the rising senior about switching positions. Anderson thought the move would be best for the team and best for Dudley’s future collegiate opportunities.

It would appear that Anderson was spot on, as the Cougars are 4-1 thus far and Dudley has seen his college recruitment start to pick up as his defensive stats start to stack up. He is hearing from Mississippi Gulf Coast the most right now on the recruiting front.

Dudley has three interceptions so far this season for a Cougar defense that has only given up one touchdown in their last three games combined. Even though quarterback is a position that most kids grow up dreaming of playing, Dudley says making the switch was not a tough decision to make.

Against Franklin County, Dudley had an idea that he would get a good shot at blocking a kick before the game ever started.

“Coach Anderson had told me to stay outside their blocker during the week at practice,” said Dudley. “I crept up towards the line and stayed outside my man. It happened like coach said it would.”

Brian Bogan picked up that blocked field goal and returned it 85 yards for a touchdown. Dudley picked up 17 yards on his interception return.

“We’re playing together, communicating, and having each other’s backs,” said Dudley. “We get along really well as a team and I think that helps us on Friday nights.”

Offensive Player of the Week Ogden prefers to run over opponents

Nick Ogden has always been known as a baseball guy. He’s played the infield, outfield and pitched in his career... read more