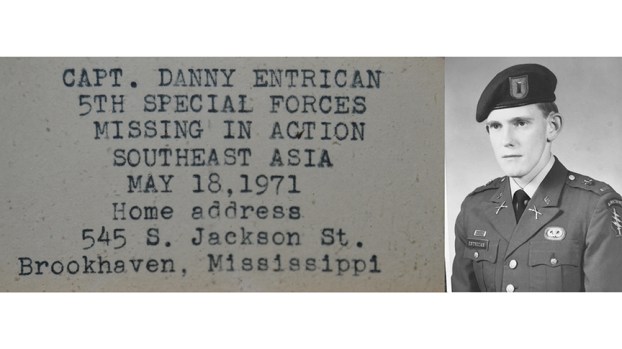 They are missing but not forgotten

Members of the Brookhaven VFW Post 2618 plan to honor those in the armed forces who were prisoners of war or missing in action during a wreath-laying ceremony Friday morning.

The post is named for Capt. Danny D. Entrican, a Brookhaven man declared MIA in 1973.

Entrican was a first lieutenant with Army Special Forces engaged in highly-classified operations throughout Southeast Asia. He was last seen wounded and presumed captured in Vietnam on May 18, 1971.

The event is open to the public and starts at 8 a.m. in front of the Lincoln County-Brookhaven Government Complex. It is being held for the first time in Lincoln County to acknowledge National POW/MIA Recognition Day.

Lincoln County Chancery Clerk Tillmon Bishop likely won’t be able to attend the ceremony, but plans to stop where he is at that time and offer a prayer.

“I can’t imagine finding someone more worthy to be honored than they are,” Bishop said.

His father, Cpl. Byron Tillmon Bishop Jr., served three years in the Army Special Forces and was captured twice and held in a North Korean prison camp during his tour — once on purpose so he could save others.

His father returned home, but some didn’t.

“They should be the most honored people in our country,” Bishop said. “A lot of them not only spent time as a prisoner of war, but died in those prison camps.”

Marlow said it’s important to remember the POWs and the MIAs.

“We want to keep their memory alive,” he said.

The state auditor is demanding county supervisors personally repay around $1.6 million to reimburse citizens for four years’ worth of... read more