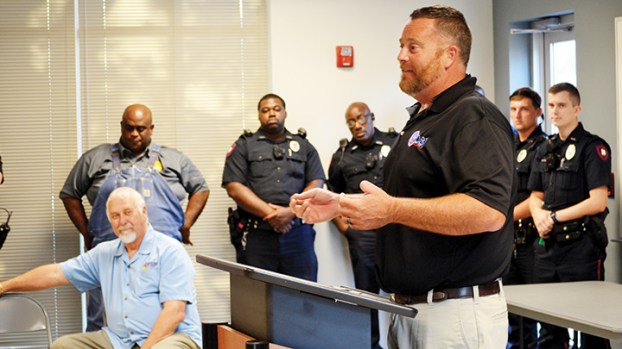 Get new trash cans, but don’t put them out

Yes, everyone should have new blue rolling garbage carts. No, they shouldn’t put them out at the curb until Oct. 1.

That’s the word from Chris Martin, the operations manager for Arrow Disposal Service Inc. — the city’s new garbage contractor — which takes over on the first day of October.

On the last garbage pickup day for Waste Pro in Brookhaven, customers should leave their empty cans at the end of their driveways. If all goes as planned, the garbage and the cart will be gone by the end of the day, Martin told about two dozen people who attended a Vernondale NeighborHood Watch meeting at the Jimmy Furlow Senior Citizen Center Thursday night.

Martin said the blue, wheeled recycle carts belong to the city and should be kept. Those who have not received a 35-gallon recycling cart should call Kayla Watts at the city’s Water Department at 601-833-7721 to request one.

Waste Pro held the city’s contract for garbage collection for two three-year terms, but was replaced recently by the Alabama-based ADSI. The Lincoln County Board of Supervisors also switched from Waste Pro to ADSI.

Jimmie Moore, the head of government and public affairs for Arrow, said drivers may need a few run-throughs on routes before all the kinks are worked out.

“Will we be perfect? No,” he said. “Will we communicate and fix our problems? Yes. We depend on people. We depend on equipment. Sometimes both let you down. I promise you that a solid waste collection vehicle or garbage truck will never break unless you absolutely positively have to have it.”

Moore said if they have problems completing a route, they will communicate with the city so customers will get accurate information if they call Brookhaven’s garbage hotline, which is 601-835-8025.

Two routes will be run in the city each day, Tuesday through Friday. That’s about 1,200 homes each day. A manager from ADSI will contact the city each of those days to let someone know both routes are complete.

“I’m not taking their people away. I’m trying to help them as much as possible, because regardless of what they leave on the ground, it will be mine Oct. 1. So, I want them to do their job and make it to the end of the contract,” he said.

Two trucks are designated for city pickup. Stickers on the top of the Arrow carts give the day for each customer’s pickup. Garbage will be collected Tuesday through Friday. Recycling for the city is picked up on Mondays.

Customers can opt to not use the garbage carts, but Martin asked that those choosing to use their own bags or cans  call the city’s garbage hotline at 601-835-8025 so their address can be documented.

“We’re very pleased with Arrow and their contract, their professionalism and their attention to detail. I think y’all will be very satisfied with them,” Mayor Joe Cox said.

Some at the meeting weren’t happy the city opted for one pickup a week instead of two. Cox explained that was a cost-cutting measure. He believes the weekly pickup will also lead to more recycling.

“Statistics show that in cities that have once-a-week pickup, the recycling increases. That’s where we’re going with this,” Cox said. “If it ends up that it’s something we have to readdress later, then we’ll look at it. You’ve got a 95-gallon can. You can get a lot of stuff in there.”

Extra carts are available for a fee.

Paper carrier gets his ride back

A newspaper carrier is back behind the wheel of his car after police in Houston, Texas recovered the stolen vehicle.... read more