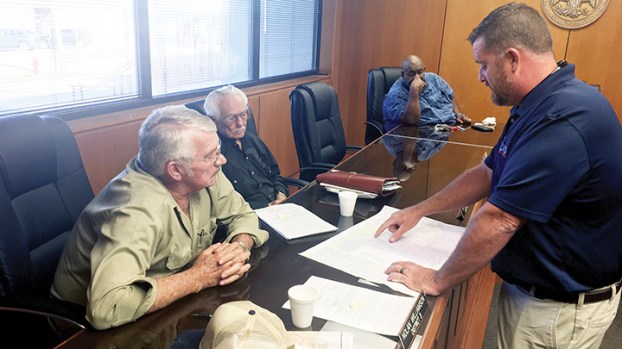 Garbage pickup days will change for some

Lincoln County’s new garbage company will swap pickup days in the southern part of the county when it tries to bring some kind of normalcy back to trash collection next week.

Arrow Disposal Service Inc. Operations Manager Chris Martin told a special-called meeting of the Lincoln County Board of Supervisors Monday around 60 roads in Districts 3 and 4 — mostly in District 3 — would be swapped from Wednesday to other business days in order to lighten the load in those areas. While other parts of the county will stay on the same rotation, the southern portion along I-55 is just too big to efficiently handle in a single day, he said.

“That’s where most of your problems are now. We had to break it off — it’s the only way we could make it feasible,” Martin said. “We tried to keep the day changes in as small and condensed an area as we could.”

Martin said residents across Lincoln County would receive written notice this week of when their garbage routes will be run. Other than the changes in the southern part of the county, the only other major difference ADSI is asking for is that residents place their garbage roadside the night prior to pickup day — previously, the deadline for getting cans to the road was 7:30 a.m., but beginning Monday routes start at 6 a.m.

ADSI begins collecting garbage Monday, after supervisors hired the company on a three-year contract. The company will replace Waste Pro, which has handled trash pickup since 2012.

Waste Pro is going out with a whimper after 2018 descended into stinky chaos at the end of driveways across Lincoln County, with the company starting out missing a few roads here and there earlier in the year, and finishing in late summer with hardly any service.

Supervisors established a trash hotline in the tax office to track misses and alert Waste Pro of work left unfinished, but numerous personnel changes and continual misses ruined the board’s trust in the company. When the board went with ADSI over Waste Pro on July 2, the company’s workers started leaving in search of new employment and missed pickups multiplied quickly.

Supervisors have pulled their work crews off the roads and set them rolling with trucks and trailers to cleanup the thousands of misses countywide. The board enacted a “cure breach” clause in its contract with Waste Pro and only recently approved a fee scale that will be used to reimburse the county for the time, manpower and equipment costs of picking up behind the waste company.

The fees will likely cost Waste Pro more than $50,000 of its final approximately $160,000 in payments from Lincoln County. Supervisors called ADSI before a special-called board meeting shortly after approving the new contract and pleaded with the company to take over for Waste Pro before Oct. 1, but contract laws prevented an early start.

With a year of trash anguish still on their minds — still ongoing, until Monday — supervisors were stern with Martin during Monday’s short meeting. The board asked Martin to ride the county roads and make sure his employees are familiar with them, reminded him not to overlook dead-end roads, to come back and pick up both ends of a road with a closed bridge.

Above all, they asked him to communicate — supervisors want to see someone from ADSI at board meetings once every month until the company settles in.

“When communication breaks down, it turns into separation, and separation leads to divorce,” said District 1 Supervisor and board president Jerry Wilson. “This is business, not friendship. If y’all can’t do it, we’re gonna replace y’all, too.”

Martin soothed supervisors’ fears as best he could, but he also cautioned problems would continue for a while as ADSI not only takes on new, unfamiliar territory, but mops up after Waste Pro, too.

“I can’t promise you unicorns and rainbows. We’re gonna have issues, but we’re gonna communicate those issues to you,” he said. “We expect garbage to be heavy for the first few days. Once we get it all cleaned up, it’ll roll.”

Smith pleads not guilty to murder

A man accused of fatally shooting an acquaintance earlier this year pleaded not guilty to the charge of first-degree murder... read more