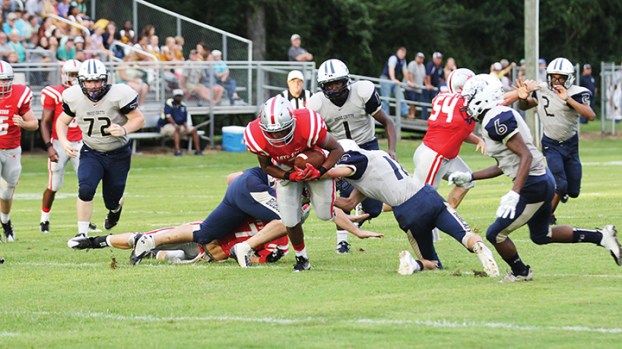 Daily Leader file photo The Bogue Chitto Bobcats and Loyd Star Hornets will face off on Hornet territory Friday for the latest iteration of the Possum Bowl. Loyd Star has won the last four Possum Bowls.

What began in 1984 as a prank cooked up by coaches at Loyd Star to fire up their team against an undefeated Bogue Chitto squad has become one of the most fun rivalries in the area. The prank involved spreading dead possums on the campus of Loyd Star and telling the team that the deceased marsupials had been placed there by Bogue Chitto.

The 2018 version of the Possum Bowl takes place at Bogue Chitto on Friday. The Bobcats (3-3) are on a three-game win streak after destroying St. Patrick Catholic last week 40-20. Loyd Star (3-3) has lost three in a row but has played one of the most daunting schedules in the area during that streak. Last week the Hornets lost 42-30 to Pisgah in another game that saw them fall behind early but refuse to stop fighting.

The crowd should be huge on Friday as both fan bases look forward to beginning Region 7-2A play with a win. The Hornets have won four straight Possum Bowls.

Another marquee game in the area this week — although this one has no snazzy title — is Brookhaven Academy (3-2) hosting Centreville (3-3). It’s homecoming week for the Cougars but the game is bigger than even that. Simply put, when the Cougars and Tigers are in the same classification, the success of the season for BA is measured on how they play against Centreville.

Brookhaven Academy is coming off of a 46-20 loss at Silliman Institute. BA only trailed by one score at halftime — 21-14 — but a 19-point fourth quarter would push the Wildcats to the win.

The Brookhaven High Panthers (4-1) also have a big measuring-stick region matchup this week when they go to Laurel (3-3). While BHS fans might head over to Jones County a little early on Friday to shop at Laurel Mercantile Co., the Panthers’ destination is between the bricks at historic Watkins Field.

Awaiting Brookhaven is a Laurel team that has losses to Oak Grove, Hattiesburg and Petal. Last season the Panthers beat Laurel 42-35 in a classic on King Field before the Golden Tornados exacted revenge — 26-22 — in the second round of the playoffs on their home field.

Brookhaven beat North Pike 27-14 last week in a game that got extremely close at the finish when the Jaguars only trailed by a touchdown and had the ball in the Panther red-zone late in the fourth quarter.

It’s homecoming in southeastern Lincoln County as the Enterprise Yellow Jackets (0-5) celebrate the occasion by hosting the Mize Bulldogs (1-5). Before their bye week of rest, the Yellow Jackets had lost two close games in back-to-back weeks to Clarkdale and McLaurin.

West Lincoln (2-4) travels to Liberty this week to take on the Amite County Trojans (0-6). Amite County is the lone non-Lincoln County team in Region 7-2A along with West Lincoln, Enterprise, Loyd Star and Bogue Chitto. Last season the Trojans won the district with a 4-0 record including a 34-26 victory over West Lincoln.

The Bears are looking forward to region play beginning after facing a murders’ row of Pelahatchie, Pisgah and Stringer in their last three games. Stringer dominated the Bears 53-7 last week on the road.

The Cobras are in a loaded region for sure. The combined record of the six teams that make up Region 8-3A was 25-10 in pre-division play.

Lawrence County (4-2) is looking for their first Region 7-4A win since joining the division last season when they take on Forest County AHS (1-5) in Brooklyn on Friday. Lawrence County dropped a 21-19 decisions to a tough Collins team last week on the road.

The Cougars went 0-5 last season in region games but will be in the running for a playoff spot this season. Awaiting them after their matchup this week against the Aggies is a homecoming date in two weeks with the unbeaten Sumrall Bobcats.

On Thursday night the Copiah-Lincoln (2-2) Wolves will try to hold on to the top spot in the MACJC South Division when they travel to Perkinston for a matchup with the Gulf Coast Bulldogs. Just like the area high school teams that play a game this week that serves as a benchmark for their season, so do the Wolves. Co-Lin versus Gulf Coast is always a big game.

Co-Lin had opportunities to spring the upset last week on No. 5 Northwest at home, but the Rangers squeezed out the 23-14 win. Gulf Coast (3-1) and first year head coach Jack Wright lost to Jones 16-13 on Thursday.