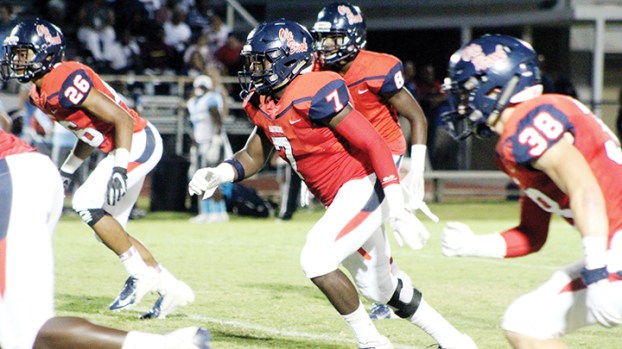 Defensive Player of the Week — It’s a family tradition

Stop me if you’ve heard this before.

Brookhaven High School has a physical, tough linebacker. He’s as polite as he is gritty. He’ll play college football one day. His last name is Calcote.

Senior linebacker Wesley Calcote is the third in a line of tackling siblings to have worn the blue and red for Ole Brook. Last week against North Pike, Calcote piled up 16 tackles in a 27-14 win. For his performance, he has been named The Daily Leader Defensive Player of the Week.

Welsey is one of seven Calcote siblings. He has older brothers — Richard, John, Kalen and Chris. He’s also got an older sister named Evette, and a younger brother named Elijah. He is the son of Tammy and the late Willis Calcote.

When he was younger, he would come to King Field as a spectator and watch Kalen and Chris suit up for the Panthers.

Kalen was The Daily Leader Most Valuable Defensive player in 2011 and went on to have a solid career as a linebacker at Alcorn State. Chris played defensive line for the Panthers and then suited up for the Southwest Mississippi Bears before finishing his career at the University of Arkansas-Monticello.

While most kids who are playing school-yard football dream of carrying the ball, Wesley always knew he wanted to be the one tackling that guy.

“There’s just something about the aggressiveness of being on defense that drew me to it,” said Calcote. “I always knew I wanted to play defense, and seeing my brothers doing it, it just made me want to follow in their footsteps.”

Long christened as the next Calcote defender to patrol King Field, Wesley had a nightmare season as a junior. While making a big play against McComb on Sept. 8, 2017, his excitement of causing a turnover quickly turned into agony.

His recollection of the play is still vivid over a year later.

“Their quarterback was cutting across the left side of the field and threw back in my direction,” said Calcote. “I jumped in front of the pass and intercepted it. I was running hard and a receiver got pushed into my leg. His helmet hit me in the knee and I didn’t have time to react. I cut a flip and came down in instant, horrible pain.”

His season was finished. A torn MCL, PCL and meniscus was the diagnosis. What hurt the most is when the doctor confirmed what he’d already feared — surgery, and a long recovery. The pain of the torn knee didn’t make him cry. Hearing that he wouldn’t be back on the field with his brothers for a year did.

Calcote plays with a brace now. His recovery wasn’t always smooth. Real progress was made after fluid was drained from his knee. He wasn’t cleared for full contact until late in the summer.

The goal for Calcote is to not think about the knee, but to trust the work done by his doctors and the therapist that rehabbed him. Run fast, tackle hard, get up and do it again — he knows that thinking about the injury will slow him down. He draws strength and inspiration from his brother-in-tackles, fellow senior linebacker D.J. Durr.

“D.J. is like a brother to me,” said Calcote. “We’ve been playing beside each other a long time now, and I know I can count on him and vice versa. It’s easy to play fast and hard when you’ve got guys like that beside you.”

“Elijah is a stud,” said Wesley. “He’s at Alexander and he’s already as big as me now. He might end up being the best out of all of us.”

Offensive Player of the Week — Sims grows into Cobra commander

Jeremy Loy has known that Antrelle Sims would be his starting quarterback this season for a while now. When he... read more