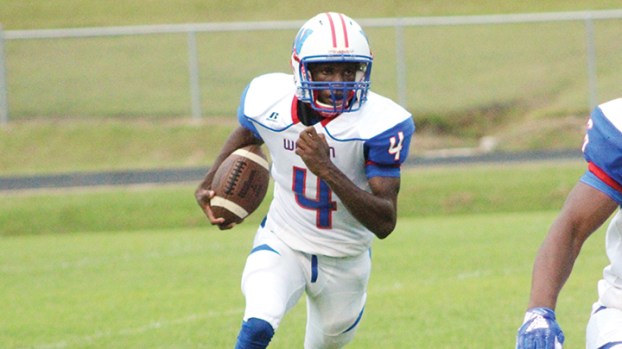 Photo by Cliff Furr Sophomore quarterback Antrelle Sims has accounted for 543 all-purpose yards for the Wesson Cobras in his first five career starts.

Offensive Player of the Week — Sims grows into Cobra commander

Jeremy Loy has known that Antrelle Sims would be his starting quarterback this season for a while now.

When he got to Wesson and saw Sims as an eighth-grader, he knew that Sims had the leadership abilities that a quarterback needed. He’d also need to further develop some of his skills and gain confidence.

That confidence has grown for the sophomore every week this season, and it was at an all-time high against Mize last week. He rushed 11 times for 223 yards and two touchdowns in a 27-0 Wesson win. For that performance, Sims has been named The Daily Leader Offensive Player of the Week.

Loy is effusive in his praise of the quarterback.

“He’s a kid that loves his teammates and loves his school,” said Loy. “He comes to practice with a great attitude every day. That’s what being a leader is all about.”

Last season as a freshman, Sims caught seven passes as a wide receiver and watched senior quarterback Dell Thigpen pile up 1,213 yards and 16 touchdowns as the leader of the Cobra offense.

When Thigpen moved on to Co-Lin after his standout senior year, Loy knew that putting the ball into the hands of one of his best athletes was the call to make for filling the position of signal-caller.

“He’s still working on improving his passing skills,” said Loy. “He’s come a long way in that area, though, and with his work ethic and attitude, it’s only going to get better.”

Against Mize, Sims averaged 20.3 yards per carry and had a long run of 71 yards. That long run went for a touchdown and came after the Wesson receivers were covered on a passing play.

Sims leads the team with 543 yards rushing and five touchdowns on the ground. Through the air, he’s thrown for 335 yards and four scores.

As a coach, Loy might have seen this all coming, but his quarterback never did.

“I never thought I would be in a situation where I would be counted on by my teammates to make plays,” said Sims. “It’s the stuff that you dream about when you’re little.”

As Sims grows his game after making five career starts on the high school level, he only sees his team getting better and growing as the season progresses.

“Coach Loy is the most positive coach you’ll ever meet,” said Sims. “Every week he tells us the team we’re playing isn’t any better than us, and for us to go out and prove him right. That’s what we want to keep doing this season, proving that we belong.”