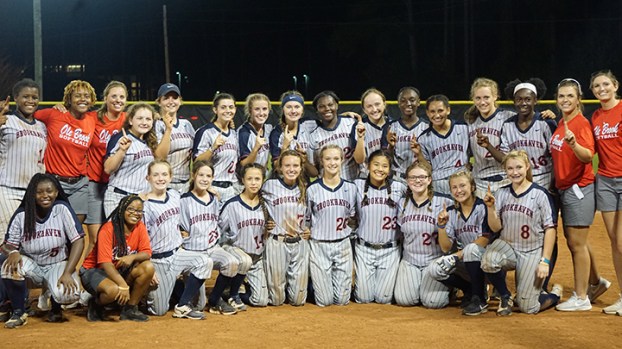 Brookhaven high softball coach Mandy Vinson and her team have a new rallying cry after their Tuesday night game at North Pike.

The phrase “tails never fails” is something this group of Lady Panthers will never forget.

Vinson and her Lady Panthers took home the Region 7-Class III division slow pitch title on Tuesday night with two wins. One of them took place on the field and the other in a coin flip.

With an 9-8 victory over North Pike, the Lady Panthers and Jaguars were tied for their region championship. The Lady Jaguars had beaten BHS 18-17 last week in Brookhaven.

As the coaches went down the tie-breaker list, the teams remained tied until the final option had been reached. Flip George Washington in the air and see who comes out on top.

The umpire assigned Brookhaven the tails side of the coin. That was cool with Vinson — her captains had already told her that was their preferred choice.

For most of the night it looked like the coin flip wouldn’t even be necessary. The Lady Panthers and Jaguars traded runs all game long, but with only three outs remaining, BHS trailed 8-7.

Vinson had faith in her team. She’s seen them grow as the season has progressed to hustle until the last out.

“This team battles the full seven no matter what the score is,” said Vinson.

Lynsey Nations tied the game up when her routine grounder went through the legs of the North Pike short stop to score a run. Another infield hit, this one on a pop-up by Kyja Willis, would score the go-ahead run when the North Pike pitcher dropped it.

Vinson and her team will finish the season with a game tonight — weather permitting — at home against West Lincoln. They’re also scheduled to travel to Lawrence County on Saturday for a tournament before finishing their regular season schedule with a home game against Franklin County on Oct. 2.

The Lady Panthers will have a first-round bye when the playoffs begin on Oct. 6, and will possibly host their first game of the postseason on Oct. 9.