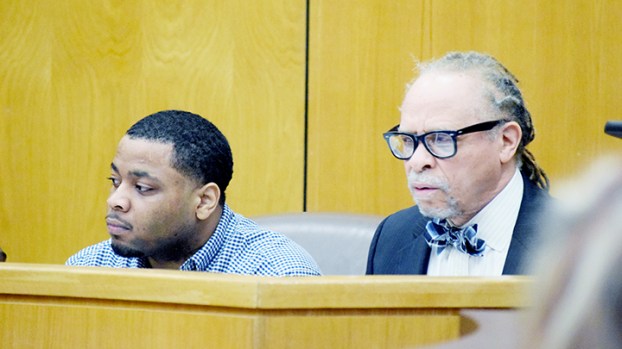 Cordarryl Bell’s attorney attacked the credibility of a key state witness Wednesday, pointing out conflicts in his testimony during the second day of Bell’s retrial for first-degree murder.

Defense attorney Imhotep Alkebu-lan spent a large part of Wednesday afternoon’s session in Lincoln County Circuit Court cross examining 22-year-old Joshua Cole, who drove 26-year-old Aquarius Nelson to King’s Daughters Medical Center the afternoon of Nov. 2, 2015, after he was fatally shot by Bell in an altercation the state calls murder, but Bell claims was self defense.

Cole’s Wednesday retelling of the events surrounding Nelson’s death differed from the account he gave in the trial back in April that resulted in a hung jury.

Whereas Cole told the first jury he had picked up Nelson, his first cousin, before noon and rode around between Brookhaven and Wesson with other members of his family, he told the new jury he was in class at Copiah-Lincoln Community College until after lunch on Nov. 2, and a trip to the Mississippi Highway Patrol office for a driver’s license renewal and shuttling of his nephews home from school prevented him from meeting Nelson until much later in the day.

Alkebu-lan also reminded jurors Cole testified in April he did not speak to Brookhaven Police Department investigator Penny Banks — also Cole’s cousin — the day Nelson was killed, but the attorney showed the courtroom a taped interview between Banks and Cole at BPD headquarters the night of Nov. 2, 2015.

“What happened between April and today that you now recall giving a statement to your cousin, investigator Penny Banks?” Alkebu-lan asked.

Cole was behind the wheel of a shot-up white Chrysler 300 that sped to KDMC with the dying Nelson in the passenger seat following the shooting, but Bell claims it was Calvin Haynes — Cole’s brother — who drove the car to the home at 115 Walnut St. where the shooting occurred.

The state alleges Bell jumped Nelson at the door to the home and murdered him with two shots from a .40-caliber pistol, while Bell claims Nelson and Haynes were coming to the home to kill him in retaliation for shooting 41-year-old Christopher Stringer in the leg. Bell says he did not shoot Stringer, whose trial on numerous drug charges in Lincoln County is pending.

Haynes and the mortally-wounded Nelson drove to another home to remove weapons from the Chrysler and placed Cole behind the wheel before the sprint to KDMC, Bell claims.

District Attorney Dee Bates countered those claims in both trials by having Cole lay out precise details of the run, giving directions at every street he took to reach the hospital. Cole also gave detailed testimony about the shooting, claiming to have witnessed it all while he sat roadside in the driver’s seat in front of the house on Walnut Street.

“(Bell) had a gun in his hand, and he told Aquarius to ‘get back.’ He yelled it twice. After that, he started shooting,” Cole said Wednesday. “I’m watching everything going on — I’m kind of stuck in that moment. Bullets are hitting everywhere on the ground. I seen the bullets start coming closer to me, and one hit the car, so I laid down in the car.”

Cole said he was “shocked” by the shooting and didn’t realize Nelson had been hit until he reentered the car, bleeding.

“He said to ‘hit it,’ to take him to the hospital,” Cole said. “He was calm, like he was fading away. Dying. I’m trying to keep him awake, telling him to stay calm. He told me, ‘I ain’t gonna make it,’ and I said, ‘quit talking’ like that.’”

Cole said there were no other passengers in the car, no weapons in the car and he made no other stops between the scene of the shooting and KDMC.

Todd May, who lives a few houses down from the home at 115 Walnut St., testified he had just picked up his son from tutoring at Mamie Martin Elementary School on Nov. 2, 2015, when he encountered the speeding Chrysler on the street and arrived home to an uncle asking him to call 911. He said he had an encounter with Bell, who was leaving the scene on foot, as he made the call.

“He turned around and looked up my way. He was doing some kind of motion with his hand, I told him to turn around and keep walkin’ — ‘keep steppin’ was my exact words,” May said.

May also testified he observed the white Chrysler circling the neighborhood several times earlier in the day, moving slowly. He called the vehicle “suspicious” when prompted by Alkebu-lan.

“Yes sir, maybe a little bit,” May said. “It’s not a car I see every day making a block in that neighborhood, so I paid attention to it.”

CORRECTION — A previous version of this story incorrectly identified the driver Bell claims drove Nelson to the scene of the shooting.

Fortunately, there were no candles to blow out. It would have taken a lot of deep breaths and the addition... read more