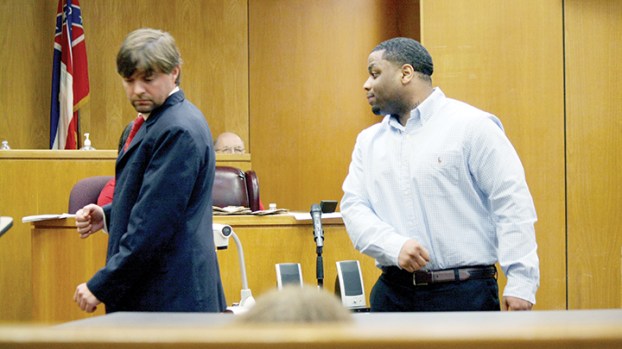 Accused: ‘It was either him or me’

Cordarryl Bell took the stand in his retrial for first-degree murder Thursday, telling the jury he shot Aquarius Nelson in self-defense because he feared for his life.

Bell, 27, testified he met Nelson, 26, at the door of a home at 115 Walnut St. with his .40-caliber pistol drawn and ready to confront what he was sure was an attempt on his own life on Nov. 2, 2015. Bell said he believed Nelson was coming to kill him in retaliation, mistakenly, for the shooting of an acquaintance the previous day, and he “didn’t give him a chance.”

Bell repeated the claims he made in a previous trial for the same charges in April this year, which ended in a hung jury after the testimony of several witnesses conflicted. Those same witnesses, and a few new ones, are back for the retrial.

Prosecutors have charged Bell with first-degree murder, claiming he hid in the home on Walnut Street and ambushed an unarmed Nelson before he could knock on the door. No weapons were recovered in the white Chrysler 300 that drove Nelson to the scene of the shooting and then flew across town to King’s Daughters Medical Center, where he died shortly afterward.

Bell left the scene on foot — Todd May, a neighbor, testified he encountered Bell as he called 911 to report shots down the street — and was arrested by U.S Marshals in Erie, Pennsylvania on Jan. 29, 2016.

Nelson’s cousin, Joshua Cole, testified Wednesday he drove Nelson to the home on Walnut Street because Nelson was owed money by Andrew Fortson, who lived there. Cole testified to witnessing the shooting, taking cover from shots Bell fired at the car and speeding across town on a shot-out tire to rush Nelson to the hospital.

But Bell claims Cole’s brother, Calvin Haynes, was the wheelman, and that Haynes drove back to his home on Independence Street to clear the vehicle of weapons and swap drivers to protect himself from prosecution. Haynes backed up his little brother’s story Thursday, telling the court Cole and Nelson visited him briefly on Independence Street before the shooting.

“They came in my room, and I gave Aquarius an outfit,” he said. “Then they left, and I went back to sleep.”

Police identified Cole at KDMC, and BPD investigator Penny Banks interviewed him at police headquarters shortly afterward, and again in the summer of 2016.

Bell’s defense attorney, Imhotep Alkebu-lan, attacked Banks’ credibility Thursday, accusing her of hiding bias toward Cole by failing to inform lead investigator Clint Earls she was Cole’s third cousin until a couple of hours before she took the witness stand. Banks said she told Earls when he asked her.

“I didn’t think about it at that time,” Banks said. “At that moment, the lead investigator was tied up at the hospital and he needed help. I was the only other investigator available. I’m an investigator who does my job, what I have to do. I’m not biased with anyone.”

District Attorney Dee Bates countered by pointing out Banks performed the Cole interview the same as she does any interview and gave the footage to Earls immediately afterward.

The longest pause of all came at the beginning of Bell’s testimony, when he alleged he didn’t give Nelson a chance to knock at the door before confronting him with a weapon because he “thought (Nelson) was gonna shoot (him) like he did Bridget Hall.” Assistant attorney Brendon Adams jumped to his feet in objection, and Taylor sent the jury out for an hour while he and the attorneys reviewed court rules and case precedent to decide whether or not the jury would be allowed to consider Bell’s claim.

Bridget London Hall, 43, was shot to death in her home on Vivian Merritt Street on July 6, 2015, when she answered a knock at her door. The murder came a day after the shooting death of Kelcay Anthony Humphrey, 25.

Claudis D. Montgomery — whose brother, Claude, was Hall’s boyfriend — was charged with murder in Humphrey’s death, but a grand jury declined to indict him. No charges have been brought in either murder.

After several discussions, Taylor ruled against Alkebu-lan — Nelson’s “uncharged conduct” is not admissible — and ordered the jury to disregard Bell’s accusation. But he had Alkebu-lan lead Bell down that line of questioning without the jury present in a proffer to preserve the statements for the record in case of appeal.

“I thought (Nelson) was gonna shoot me and kill me like he did Bridget when she was walking to the door. That’s why I answered the door with a gun in my hand,” Bell said in the proffer.

Adams attacked Bell’s recounting of the shooting in cross-examination, pointing out forensic evidence that suggests Nelson was shot in the left side of his back — impossible if Nelson was twisting to the right to draw on Bell, as Bell claims.

Adams also questioned how Bell could tell it was Haynes, not Cole, driving the white Chrysler 300 from such a distance when he couldn’t remember what color of shirt the driver was wearing, moving back into the audience chamber of the courtroom to illustrate the distance between the car and the house where Bell waited.

“Don’t you think it’s a strange coincidence Joshua Cole knows every detail, when he supposedly wasn’t even there?” Adams asked. “You saw the tape of him and Mrs. Penny — that was just an hour later, and he had all those details then.”

Adams also attacked Bell’s claim Haynes and Cole switched places before heading to KDMC — the 911 call about the shooting was made at 4:32 p.m., and Nelson was admitted to the hospital at 4:38 p.m.

“Within six minutes, the went to Independence Street, unloaded guns, changed drives to Joshua Cole at a house he didn’t even live at? That’s your testimony?” Adams asked.

Taylor called a recess shortly before 5:30 p.m. The trial resumes this morning at 9 a.m.