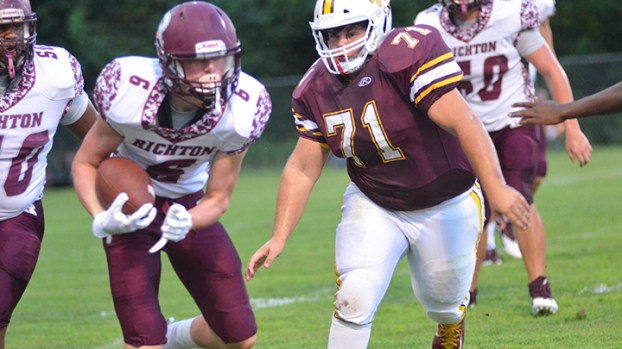 Photo by Dave Linton Enterprise senior Travis Huber closes in on a Richton runner in a game earlier this season.

Enterprise alums will be welcomed back to campus today as the Yellow Jackets (0-5) host the Mize Bulldogs (1-5) for homecoming.

Coach Brooks Burns and his team are coming off a bye week and will be playing their final non-divisional game before they begin Region 7-2A play next week at West Lincoln.

Mize — coached by longtime leader Kenny Robinson — has long been a traditional power in the smaller classifications of the MHSAA.

Enterprise has seen their last two games come down to the wire. They held fourth quarter leads against Clarkdale and McLaurin before seeing both opponents snatch victory away.

Burns says his team is rested and ready after the week off. He’s also hoping for another big game from his defensive line, led by Mitchell Poole and Josh Richardson.

“We had a good week of practice and we’ve got most everybody back healthy and ready to play,” said Burns. “The biggest thing for us is going to be stopping their running game.”

Kickoff at Harry Cole Field is set for 7 p.m. The crowning of the homecoming queen and presentation of the court will precede the game at 6 p.m.

Lawrence County (4-2) travels to Brooklyn tonight to take on the Forrest County Agricultural High School Aggies (1-5) in the... read more