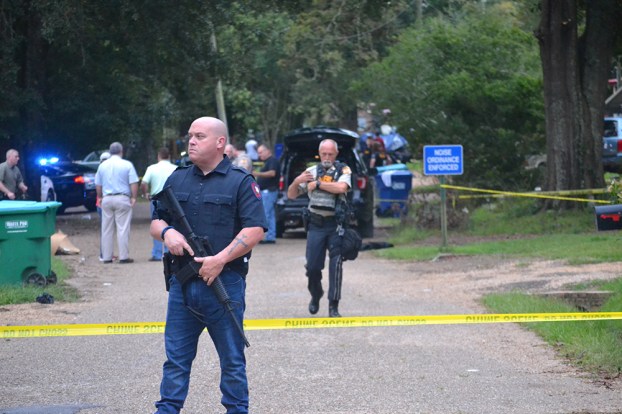 A shooting on North Sixth Street had already taken place before a pair of Brookhaven policemen arrived there and were killed in the line of duty, according to an audio recording of the department’s radio traffic.

The final voice transmissions of BPD patrolman James White, 35, reported to dispatch he had discovered a shot-up Cadillac Escalade with blood in the driver’s seat and bullet holes on the passenger side at an address at 600 North Sixth St. His final transmission was to report shots fired, and shortly afterward BPD Cpl. Zach Moak, 31, arrived and reported “33 is down,” before calling, “I’m hit, too.”

The dispatcher gives an urgent alert for all units to respond, and other officers can be heard calling for “32” — Moak — before a second dispatcher advises two officers down. The entire department responds afterward, and other agencies are alerted.

The call that brought Moak and White to the scene went out shortly before 5 a.m. Saturday. Both officers were transported to King’s Daughters Medical Center, where they were pronounced dead.

The recordings reveal White arrived at the scene in what appears to have been a lull in an ongoing crime. Approximately three minutes pass between the time he describes the bloody Cadillac and the time he reports “shots fired,” and he can be heard calmly examining the scene and calling in vehicle tag numbers in between. Less than two minutes later, Moak reports White is down, and barely 20 seconds pass before Moak calls that he has been hit. Moak makes a few more transmissions in the following moments calling for backup as other officers fly to the scene.

Brookhaven Police Chief Kenneth Collins said Moak and White were shot down in front of a home at 600 North Sixth St. shortly before 5 a.m. Saturday while responding to a call of “shots fired” in the neighborhood, which is two blocks north of Rosehill Cemetery. The officers arrived at the scene separately — White first, and Moak quickly after — and exchanged gunfire with at least one suspect, who was wounded and taken to a Jackson hospital, where he is in custody.

The full recordings of the morning’s police radio traffic are available online in the archives of Broadcastify.com.

In the aftermath of the shooting, dispatchers can be heard directing additional officers and paramedics to the scene. Ambulances from KDMC are held off the scene until police can make sure the area is secure. When officers request additional ambulances from KDMC, they are advised the hospital’s other trucks are busy and call on backup paramedics from Rural Rapid instead. Throughout the recordings, officers can be heard requesting additional ambulances and status updates on their arrival.

An unknown officer reports a shooter in custody around 5:20 a.m. and “all parties accounted for,” and other responding units are advised not to approach Sixth Street form the south — the side of the residence where the shooting took place. Collins reports around 5:30 a.m. that he’s leaving the scene for KDMC and tells dispatch to release no information. Another officer radios in he needs additional officers to block off the perimeter because “we’ve got bystanders coming.”

Faith leaders say ‘We need to care for one another’

At least two Brookhaven pastors believe evil exists in Lincoln County but there is enough good to push it out... read more