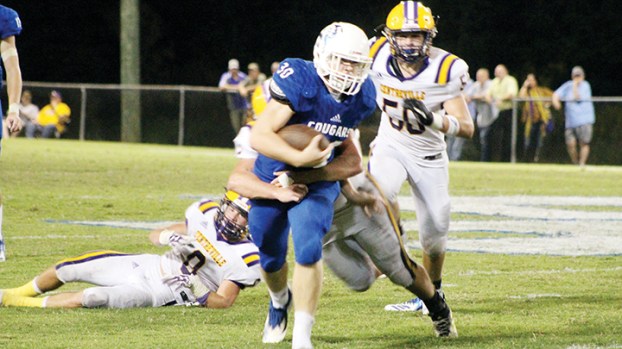 Cougars could have caved

There was a moment when it looked like Centreville (3-4) had complete control of their game at Brookhaven Academy (4-2) on Friday night. They had just blocked a punt and scored on a long passing play to take a two-score lead midway through the third quarter.

The purple and gold clad Tiger fans were ringing cowbells, honking air horns, and feeling like they had ruined homecoming for the Cougars.

BA coach Ron Rushing didn’t look panicked. Neither did assistant coach Jaymie Palmer or the young men they lead. Not panicked, but frustrated.

Big plays had decided the first half of the game and put the Cougars in a 14-7 hole at the break. One of them — a wide open screen play that BA missed on an overthrow — would have surely went for a score. Another one was a 45-yard Centreville touchdown run that came after running back Cade Hurst spun out of a tackle, put his hand down to plant, and raced past the Cougar defense who had initially stopped playing when they thought he was down.

Late in the first half BA had the ball inside the Tiger red-zone. They had earlier attempted a field goal in a similar situation and had the kick blocked. This time Rushing called for a Dawson Flowers quarterback keeper on fourth down and the Cougars were stopped. The spot was less than ideal for the home team and Centreville was able to take a knee and a 14-7 lead into halftime.

It’s hard to quantify just how closely matched the two teams are. They appear equal in size, speed, strength, and skill. The Cougars knew that the Tigers weren’t better than them and that they had missed some big opportunities.

The BA drive following the blocked punt was a combo of what worked best for the Cougars all night. Flowers quarterback keepers. Nick Ogden runs that featured smaller Tiger defenders bouncing off the Cougar running back like love-bugs smacking against a windshield. Wide receiver Cade Brown overmatching the Centreville defensive backs.

The Cougars quickly moved down field to pull back within one score when Flowers hit Brown on a slant from 5-yards out.

Flowers gave a little fist pump when he ran off the field and you could see belief start to lighten up the Cougar sideline. Belief in the way that seniors Keegen Smith and Cole Griffin led a gang-tackling attack on the Tiger running backs. Belief when BA pulled with two points on a touchdown but were unable to tie it on a conversion attempt.

The belief boiled over into full blown hysteria when Brown caught a short passed and juked his way down inside the Tiger four-yard line to set up the eventual game-winning field goal by freshman Corey Case.

Brookhaven Academy concludes the regular season portion of their home schedule when they host Benton Academy (0-7) Friday night. The Raiders from Yazoo County are winless and have a very small roster so expect the starters to have a short night of work on senior night.

Loyd Star is trying to make history when they host Amite County (1-6) for homecoming on W.E. “Sambo” Smith Field. The Trojans are 20-0 against Lincoln County competition since moving down to 2A in 2011. The winner will be in control of the top spot in Region 7-2A at the halfway point of division play.

Amite County defeated West Lincoln (2-5) 44-14 in Liberty last week. No team has come closer to beating the Trojans during their county win streak than Loyd Star. The Hornets lost by six points in 2017 to the Trojans and by two points in 2016.

West Lincoln hosts Enterprise (0-6) as the Yellow Jackets are coming off of another close loss.

For the third consecutive game the Yellow Jackets held a fourth quarter lead that they could hold on to, this time falling 24-20 to Mize.

Bogue Chitto makes a trip to Rankin County this week to play Pisgah (6-1). The powerful Dragons already have wins over Loyd Star and West Lincoln in 2018.

Wesson (4-2) got hit with a barrage of early scores in a 44-0 loss to Columbia (5-1) last week that they were never able to recover from. The Cobras travel to Seminary this week for another tough region test. Last week Seminary knocked off previously unbeaten West Marion in their region opener.

The biggest game of the week for the area will take place in Monticello as the Lawrence County Cougars (5-2) host the Sumrall Bobcats (7-0).

The Cougars reamed, steamed, and dry-cleaned the Forrest County AHS Aggies on Friday night 51-0. Kylan Cooper scored five times and the Cougar defense did not allow a first down all game.

Things might not be quite as easy on Friday for the Cougars as the Bobcats have a physical front seven on defense and an Ole Miss commit at quarterback in Dannis Jackson.

The closest Sumrall has come to defeat this year was an 18-15 win over Wesson in the second week of the season.

It will be homecoming in Monticello as the Cougar faithful are hoping their team can take control of the region rankings with a win.

Fresh off hammering Gulf Coast 38-13 on the road last week, Copiah-Lincoln (3-2) travels to Decatur on Thursday for a matchup with East Central (3-2).

The Warriors and Wolves are both 2-0 in the south division. East Central nearly pulled an epic upset last week before losing 24-21 to the No.1 East Mississippi Lions.

East Central has had close games all season, losing by four or less twice and winning games by six, seven, and three-point margins.

Aubree Britt of Loyd Star was the top finisher in the girls’ division on Saturday at the West Lincoln Cross... read more