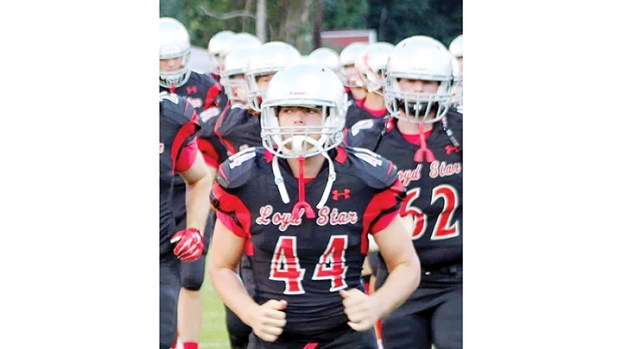 Photo by Katie Furr Loyd Star’s Brayden Ezell is the Defensive Player of the Week.

There probably aren’t many things in your life that you love more than Braden Ezell loves playing football.

Ezell has the scars to prove it.

On Friday night against Bogue Chitto, he made nine tackles and a sack. For that Possum Bowl performance, he has been named The Daily Leader Defensive Player of the Week.

In the third game of his freshman season against Sacred Heart, Ezell had a complete tear of his ACL and a partial tear of his meniscus in his right knee. The rehab was long and grueling, but Ezell kept a good attitude. He knew these types of injury would happen and was encouraged by the support from his parents, Hunter and Deanna.

When his sophomore season rolled around he was ready to get back on the field and make up for lost time. That lasted until the second game, against McLaurin, when Ezell tore his left knee — a full ACL and meniscus tear this time.

“That one was bad,” said Ezell. “Physically and mentally, that one was worse.”

His momma and daddy never said he had to stop playing football as he went through another year of rehab. They did tell him that if he wanted to hang up his cleats, they would fully support that decision.

It’s a choice that Ezell mulled over for a long time — his love of the game versus the dread of further injury.

He continued to lift and rehabilitate, and in the spring of his sophomore year he heard that Brian Ford was coming to coach at Loyd Star. Ezell knew that soon a new system, with new plays and new drills and new game plans, would fill the thoughts and time of his teammates. He couldn’t stand to think about not being a part of that.

In 2017, Ezell was finally fully healthy and was a leader on the Hornet defense. Ford has said that Ezell is the guy who knows where his teammates need to be on the defense. That’s a compliment the senior gladly accepts.

“I line up wherever coach needs me to from week to week,” said Ezell. “Sometimes I’ll be at linebacker, but most of the time I’m at defensive end. I’ve taken some of the younger guys under my wing that have had to play defense this year and, every game, I’m checking with them before we start to remember their assignments.”

Those young guys Ezell talks about have had to step up after Loyd Star has had three key starters go down to serious injuries this season. Ezell himself had another injury he dealt with in the spring, as his right knee again gave him a reason to worry.

“I was playing quarterback in the spring and I felt something get tweaked in my knee,” said Ezell. “The next day I couldn’t put any weight on it. I was sad that next day and worried, too. I finally told my parents about it and they took me to the doctor. It was only a meniscus tear this time, and I was able to get it fixed and be recovered within a month.”

Ezell feels like he knows more about the inner-workings of the knee than any senior in the area. Anatomy and physiology is a class that didn’t give him much trouble in school.

“I made a 100 when it was time to label the parts of the leg and knee,” Ezell says with a laugh.

Maybe it’s the injuries, and the insight that comes with recovering from such serious operations at a young age, or maybe it’s just how his parents raised him, but Ezell is a confident, mature young man.

There is no waiver in what he wants to do in the future.

“I want to go to Co-Lin and major in automation and control technology,” said Ezell. “My brother Brock did the same thing, and he’s got a really good job at Grand Gulf in Port Gibson.”

That’s the future, though, and right now Ezell and the Hornets have a huge homecoming game against Amite County coming up on Friday.

“I’m excited to try and stop them. They’ve got a lot of speed,” said Ezell. “I know that I don’t have many games left in my high school career, so I want to make the most out of every play I’m in there.”

The 3-2, 2-0 Copiah-Lincoln Community College Wolves are on the road for the second straight week Thursday as the team... read more