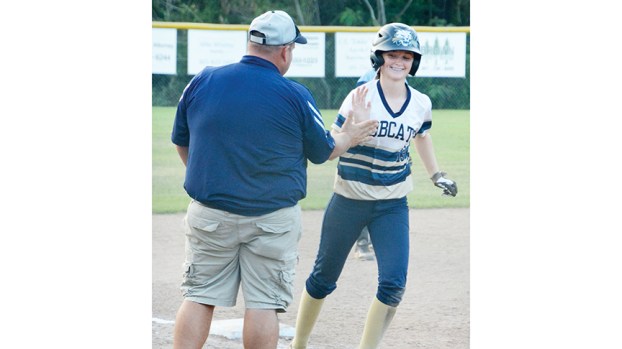 Photo by Stacy Leake Bogue Chitto senior Karly Leake gives a high-five to coach Kris Smith as she rounds third after hitting a home run on Tuesday against North Pike.

Ties and lead changes were the theme for game one, as both teams saw the ball well. Defensively, both teams played solidly, but the Lady Bobcats were able to make a few more routine plays than the Lady Jaguars, which helped propel them to victory.

“We played as a team,” said Leake. “North Pike jumped on us and we never gave up. We came back and scored on them and we played together and never gave up.”

Striking first, North Pike built up an early 4-0 lead off of a two-run home run, a solo home run and a two-out RBI double in the first inning.

Bogue Chitto quickly responded in the bottom of the inning, as they were able to load up the bases. Codi Leggett scored the Lady Bobcats’ first two runs off a two-run RBI single. Bogue Chitto also got a Kylie Chapman RBI in the inning.

North Pike broke a 4-4 tie in the top of the third with a leadoff home run to center field.

The Lady Bobcats tied up the game in the bottom of the fourth off an RBI double by Alece Nettle.

The Lady Jaguars took the lead in the fifth off a home run and an RBI sacrifice to lead 7-5.

Bogue Chitto took their first lead of the contest in their half of the fifth. Jackson started the scoring with a two-run single. Juliaan Frazier followed with a two-run home run over the left center fence. Leggett also nailed a solo home run to give the Lady Bobcats a 10-7 lead.

The Lady Bobcats added insurance runs in the sixth, as Leake blasted a three-run home run.

Game two was much of the same, as the Lady Bobcats’ bats stayed hot.

The Lady Bobcats broke the tie in the second, as Leake nailed an RBI double.

The Lady Jaguars retied the game in the top of the third with a two-run home run to make it 6-6.

North Pike jumped in front of the Lady Bobcats in the fourth, scoring four runs to lead 10-6.

The Lady Bobcats took control of the game and the lead in the fifth, as Jackson nailed a two-run home run. Montgomery brought in a run off her RBI single. Chapman, who was celebrating her Sweet 16 birthday, launched a three-run home run before the Lady Jaguars could get out of the inning.

Bogue Chitto added three insurance runs in the sixth, scoring off a North Pike error and a two-run home run by Jackson.

“The girls came out and played good,” Bogue Chitto coach Kris Smith said. “They hit the ball in both games. North Pike jumped out on us in both games, and the girls responded, and I was really pleased with the way they did that. Defensively, we didn’t make too many errors and made the routine plays and cut down on walks.”

Bogue Chitto was slated to host a first-round playoff game on Saturday, but due to a forfeit they will move on to the next round. They await the winner of the matchup between Leake County and Lake.

Bogue Chitto will play again Oct. 9 in the second round of the playoffs.

It was wonderful weather and a great afternoon for softball Tuesday evening, as fans packed the park to see the... read more