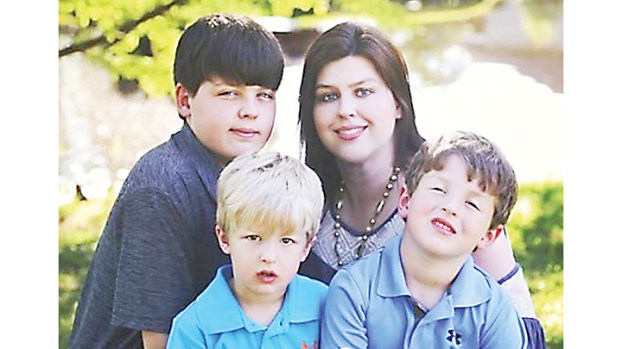 Photo submitted Pictured are Christy Murphy with her sons Cody, Caiden and Chase.

Christy Murphy received the call on her way back home Friday night after picking up her oldest son, Cody, from the Brookhaven Academy football game.

Their house was in flames.

Volunteer firefighters from Heucks Retreat, New Sight, Hog Chain and East Lincoln did their best to save the mobile home where Murphy is raising her three boys, but the fire was too much and moved too fast.

Most of the fire damage to the home at 2172 Heucks Retreat Road was confined to the laundry room and the crawl space above the ceiling, but the home and contents were a total loss because of smoke and water damage, Heucks Retreat Chief Mike Campbell said.

The Student Council at Brookhaven Academy is collecting gift cards for the family through Wednesday. Donations can be made at the BA elementary or high school offices.

All three of Murphy’s sons attend BA. Cody is 13, Chase is 6 and Caiden is 4. Murphy is a registered nurse at Brookhaven Internal Medicine. She had lived in the home for eight years.

Now she and the boys are living with her parents.

“It was very shocking and heart-breaking,” she said.

Murphy took Monday off to spend the day with her sons. The younger boys don’t know a lot about the fire or that they’ve lost most of everything they own.

“I just want to thank everyone who has reached out to us, prayed with us and for us, provided for us since this tragedy Friday night,” she said. “To all the firemen, thank you for your quick response, dedication and help even after the fire. They assisted me in grabbing precious memories and keepsakes. Some have called to follow up and check on us. God is good all the time.”

The cause of the fire remains under investigation.

Jake hopped around on three legs, just as happy as could be. He didn’t have a clue about the prayer... read more