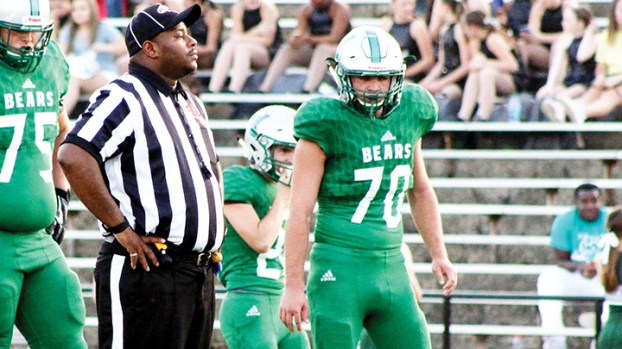 Photo by Cliff Furr West Lincoln senior Cam Buckles is The Daily Leader Defensive Player of the Week after making 11 tackles and one sack in a region win over Enterprise.

Cam Buckles has seen the growth of West Lincoln football in his four years of wearing the green and white. As a senior, White takes great pride in knowing the program is stronger at the end of his career than it was when he entered high school.

Against Enterprise last week in a 40-22 Bear victory, Buckles made 11 tackles — three for a loss — and one sack. For his performance, he has been named The Daily Leader’s Defensive Player of the Week.

Buckles has moved around on defense this season, as coach B.J. Smithhart and defensive coordinator Brad Bland have plugged him into different positions. Earlier in the season, Buckles was used on the defensive line, but against the Yellow Jackets he was back at the linebacker position.

“I had a good night of reading their formations and flowing to the ball,” said Buckles.

Buckles also plays offensive guard for the Bears. His love of the game runs deep, but he looks at Friday night like it’s work.

“I know every week that I’ve got a job to do,” said Buckles. “I want to do my job to the best of my ability, so my teammates and coaches know that it wasn’t me who let them down.”

Buckles is the son of Mike and Kristie Buckles. His older brother, Chase, played basketball at West Lincoln.

With family roots firmly planted at Flea Hop, Buckles knows the history of West Lincoln football and knows how big his junior year was. In 2017 — in their first season under Smithhart — the Bears finished second in their region and hosted a playoff game for the first time in school history.
“With us being the last county school to start a football team and it not being that long ago (20 years), it feels great to know that I was part of building a strong foundation for future West Lincoln football teams to grow from,” said Buckles.

The Bears started the season with two straight wins before a five-game losing streak against some stout competition. The win over Enterprise broke that streak and gave the team a boost.

“Winning last week was really big for our morale,” said Buckles. “We’ve stayed together and kept working through it all, but it feels good to have your hard work pay off with a win.”

Smithhart says that all the talk Buckles does about work isn’t just talk. His senior leader walks the walk, too.

“Cam is one of our hardest workers and he’s a great teammate as well,” said Smithhart. “He’s a locker-room favorite, and on Friday night he plays like his hair is on fire.”

Buckles would like to play college football — he’s talked to Hinds about trying to make the team there — but if that doesn’t work out, he knows what he wants to do.

“If I don’t play football after high school then I’m going to Co-Lin to take their Electrical Technology program,” said Buckles. “It’s a career that’s always interested me and one that’s easy to find a job in.”

Loyd Star sophomore running back Eric Birch has moved around as he’s grown up. Birch has been to school at... read more