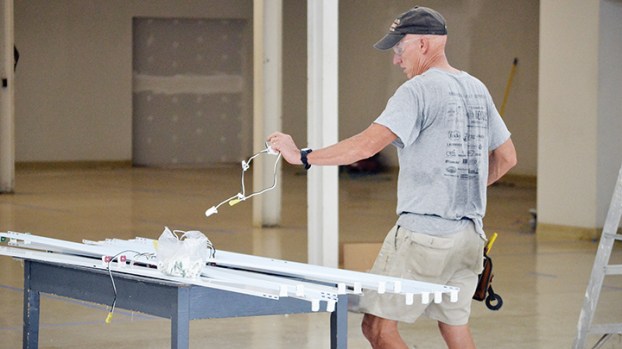 Frank Moak is building what he hopes will be another family legacy in the space that was home to Perkins Ace Hardware for nearly five decades, and he’s naming it after his father.

Thomas Lynwood Moak was buried in Norfield in 2013. Tom’s Climate Control Storage could be open by Thanksgiving, or Christmas at the latest.

In recent weeks, the younger Moak has replaced 165 light fixtures, switching from fluorescent bulbs to LED. He did the wiring himself and changed each bulb by hand.

The framework is complete and walls are going up for the units, which will range from 25 square feet to 200 square feet.

“We’ve got space for everything from a house to a closet,” he said.

The framework for the units should be completed by the weekend, he said. Next will come the roll up doors and the wire mesh tops on the units that will allow temperature-controlled air to circulate while providing security for each unit’s content.

“It would be very difficult to get through,” he said.

The property is special to Moak, who helped his dad prepare for the building’s construction in 1972. His father — who was the third to own the Perkins name — moved the store there from its downtown location. He eventually sold the store to Jimmy and Linda Pickett, who sold it to Keith Dorman in 2006. Dorman relocated the business to its current location on Hwy. 51.

With the building empty, Moak needed to fill the space with something, but wasn’t sure what.

He heard a few inquiries, but most involved huge, expensive renovations on his part. Splitting the space up would be costly as well.

Then he considered storage units. He did his homework and decided to fill the space with climate-controlled spaces for customers to keep items like financial records, paintings and furniture.

“Heat and moisture will damage furniture,” he said. “They’re going to mold and mildew in standard storage.”

When completed, the units will be available through monthly lease. Lighting will be activated by motion-control so it will be well lit for any customer entering the building day or night.

“It will be extremely secure and safe because you have so much traffic and it’s in a great part of town and easy to get to,” he said.

Parking in front will be changed to parallel to make it easy to load and unload through the front door.

Customers will be able to lease a unit online at www.tccstorage.com when the site is activated. A map of the building will show which units are available. Sizing and pricing will be listed.

Units that are already leased will be blacked out on the map.

“If they’re open, it will have the size on it and the price, and you click on that,” he said. “Put your credit card in. You’ll get a four-digit code. You come down here and I’ll never see you.”

The individual units will have a place for customers to use pre-purchased locks. The front door can be unlocked with a key code.

Moak and his wife, Terri, owned bike shops in Natchez and Hattiesburg before moving back home to Brookhaven in 2000 to help Tom Moak manage the Brookway Boulevard property, which stretches from the WIN Job Center to Enterprise Rent-A-Car.