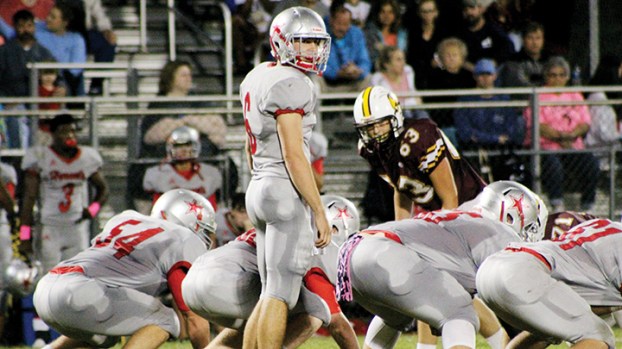 Photo by Cliff Furr Loyd Star quarterback Dane Smith surveys the line of scrimmage before the snap. Smith passed for three touchdowns and also recovered two fumbles on defense in a Sting Bowl victory for the Hornets.

For the first time in 2018, it felt like fall football weather as the Enterprise Yellow Jackets (0-8) hosted the Loyd Star Hornets (6-3) on Thursday night for the annual Sting Bowl. The game was tight in the first half before a disastrous sequence for Enterprise in the second quarter put Loyd Star up three scores, and the Hornets would then cruise to an eventual 61-22 victory.

With 2:21 remaining until halftime, Enterprise scored and got a two-point conversion to cut the Loyd Star lead to 21-14. The Jackets got a 1-yard scoring run on a quarterback sneak by freshman Matthew Burns. Junior running back Dylan Vaughn had gotten down to the 1-yard line the play before on a 13-yard run. A long pass from Burns to senior tight end Andrew Greer was key for Enterprise to move in to Loyd Star territory earlier in the drive.

On the next Hornet possession quarterback Dane Smith found Eric Birch in the flats on a short pass. Birch — The Daily Leader Offensive Player of the Week — made for the sideline and outran the Enterprise defense for a 50-yard touchdown catch and run.

Just 42 seconds remained before halftime and Loyd Star led 27-14. With Enterprise set to receive the second half kick, it appeared the Jackets would be content to run out the clock and prepare for the second half.

The Cole Carpenter kickoff following the Birch touchdown was mishandled by Enterprise, as it hit the return man in his lower leg when he ran to field the ball. The ball was only on the turf for the briefest of moments, but that’s all the time Dane Smith of Loyd Star needed to recover the fumble.

Smith came flying in — unblocked — and slid towards the ball like a runner headed for home plate. The senior reached out and made a one-handed snag of the ball that left the Enterprise return team stunned at just how quickly he had gotten to the ball. It also impressed his coach.

“That fumble recovery was one of the best I’ve ever seen,” said Loyd Star coach Brian Ford. “What can you say about a guy like Dane, who is our quarterback, plays on defense and is selling out on special teams?”

On the very next play, Smith hit Je’Mario Clay for a 17-yard touchdown pass that put the Hornets up 34-14.

Seven seconds had ticked off the game clock between Hornet touchdowns.

A halftime adjustment by Ford and his staff of Adam Smith, Seth Britt, Scott Leggett and Chris King went a long way toward the Hornets limiting Enterprise to only one second-half touchdown.

The Yellow Jackets had steady success in the first half running inside traps and going to Vaughn for runs between the tackles. Vaughn scored on a 5-yard run in the first half to put the Jackets on the board and cut the Loyd Star lead to 14-6.

The Hornets adjusted to a six-man front and did a better job of limiting the Yellow Jacket runs. Keying on stopping the run did allow Enterprise to have some success moving the ball via the air. Matthew Burns hit his brother — tight end John Burns — for several long gains in the second half.

The Burns-to-Burns connection would result in the final Yellow Jacket touchdown of the game when Matthew hit John with a 17-yard touchdown pass with 11:19 remaining in the game. The pair also had a 25-yard gain through the air on the same drive.

Loyd Star fullback Zach Nevels scored twice on long runs, one from 25 yards out to put the Hornets on the board and another from 51 yards in the fourth quarter. Senior Braden Ezell also got his first two touchdown carries of the season on short runs in the fourth quarter. Freshman Versie Wilson also scored twice on the ground for Loyd Star. Smith tossed a first-quarter touchdown to Zabien Price.

At times it appears the Hornets have an embarrassment of riches in their skill positions. It’s a situation that makes senior center Rials Hester a very happy offensive lineman.
“Our offensive line has a big brother mentality,” said Hester. “Nobody messes with little brother and that’s how we think about our skill guys. We love seeing our playmakers go out and make big plays.”

Hester starts on the line alongside tackles Peyton Morse and Charlie Parrett, and guards Parker Bracey and Bailey Calcote.

Enterprise had success moving the ball all game but did themselves no favors by fumbling the ball four times. Eighth-grader Lezeric Brothern recovered two fumbles for the Hornets. Carpenter finished 7-of-8 on PAT kicks.

Enterprise coach Brooks Burns was proud of the fight his team showed and their ability to move the ball offensively. He was not pleased with the officiating, as Enterprise had one player ejected for an unsportsmanlike conduct and another 15-yard penalty called on their sideline.

“It’s difficult enough to overcome the adversity of the game, but we had some other things to overcome that we shouldn’t have had to deal with,” said Burns. “I was proud of how hard the kids played. Defensively, we had guys in position, but missed on some plays that will hurt you against a good team.”

Enterprise travels to Amite County next week before ending their season with a home game against Bogue Chitto.

Loyd Star is off next week with a bye before they host West Lincoln in a game that will most likely decide who wins the Region 7-2A championship.

The Brookhaven Academy Cougars (6-2) made the long trek from Brookhaven to Farmerville, Louisiana for a non-division contest against the... read more