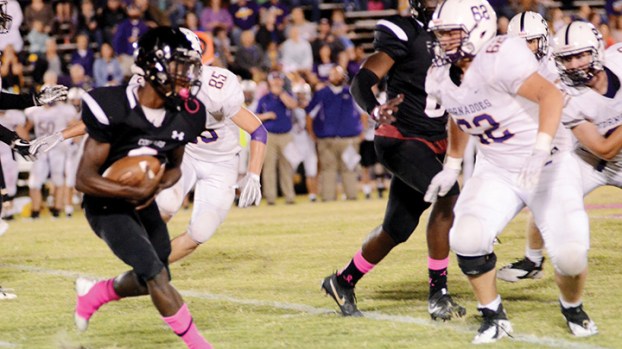 On senior night, the Cougar nation got their money’s worth and then some. The underdogs from Purvis gave the Cougars all they could handle. The game featured several ties, but in overtime it was the Lawrence County defense that stood tall to take the win.

“We had a few mess ups but we came back and forced overtime,” Cougars junior Kylan Cooper said. “The first half was rough but we did our job in the second half.”

Receiving the ball to start the contest, the Cougars relied on their running game as they marched down the field and scored the game’s first touchdown when junior Antwan Pittman took the ball into the end zone from the 6-yard line with 7:50 left in the first quarter.

The Cougars soon found the endzone again as they forced Purvis to punt the ball away and Cooper returned the punt for the touchdown, to lead 14-0.

Purvis found the endzone on their second offensive possession of the game. Converting two fourth downs to keep their drive going, the Tornados marched down the field and scored on a 5-yard pass as senior quarterback Mason Kendrick connected with junior Jesse Johnson.

The Cougars added onto their lead as sophomore quarterback Haden Mullins connected with junior Perez Tyler for a 11-yard touchdown. The Cougars led 21-7 with 7:54 left before halftime.

The Tornados answered — after moving the ball down the field on the ground — with a 3-yard run by sophomore Wayne Ray. Missing the point after, Purvis was down 21-13.

The Tornados tied up the game with 2:51 left before halftime, forcing a Cougar fumble and scoring on a one-yard run by Kendrick. Going for the two points, Purvis tied up the game at 21-all heading into halftime.

Purvis took the lead in the third, as they scored the only touchdown of the quarter on a 19-yard pass from Kendrick to Johnson.

Heading into the fourth quarter, Lawrence County was down 28-21 and needed some kind of spark.

The Cougars got that spark as senior Tywan McLaurin intercepted Kendrick.

With 3:49 left in regulation, Lawrence County tied the game up the game on a 17-yard run by Pittman.

Taking the ball first in overtime, the Cougars scored as Cooper ran the ball in from the 10-yard line.

“I got the touchdown for my team so we could go to the playoffs,” said Cooper.

Purvis was unable to answer, as Lawrence County’s defense pushed the Tornados backwards three straight plays and finished the game on an incomplete pass, giving the Cougars a 35-28 win in overtime.

“I was proud of the team’s effort to battle through adversity and come out victorious,” Cougars coach Jessie Anderson said. “I think Purvis had a really good game plan. They ran the ball right at us. We were prepared for the spread, that’s what they have been in all year. They came out in the I-formation and ran the ball right at us. Our defense adjusted well and got the job done.”

Lawrence County will be on the road Friday as they travel to Leakesville to take on the Greene County Wildcats. Kickoff slated for 7 p.m.

With do-it-all Brookhaven High quarterback Sevante Quinn out of action for at least the next two weeks, junior Darius Robinson... read more