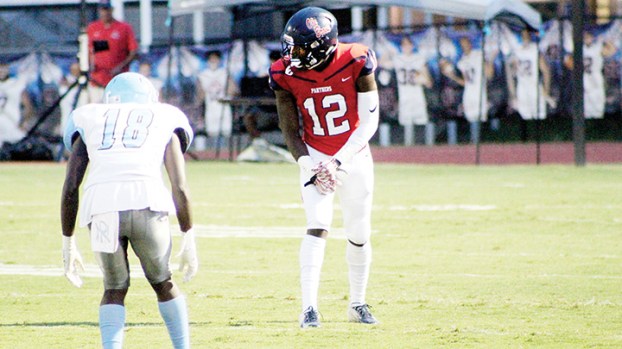 Photo by Cliff Furr Senior receiver John Hilbert had a touchdown catch for the Brookhaven Panthers Friday night at Natchez.

With do-it-all Brookhaven High quarterback Sevante Quinn out of action for at least the next two weeks, junior Darius Robinson stepped in under center to lead the Panthers  (5-3) against the Bulldogs of Natchez (6-2) on Friday night. Brookhaven would fight until the end, but ultimately it would be the Bulldogs who slipped past the Panthers, 34-33.

The Bulldogs took an early one-touchdown lead, but BHS answered back quickly with a score of their own, tying the ball game at the end of the first quarter, 7-7.

Going into the second quarter BHS was looking to secure a lead and keep it there. An impressive pass from Robinson to John Hilbert for a touchdown and the follow up extra point gave the Panthers the lead 14-7going into the half.

“We’ve got to go for the big plays,” said Panther head coach Tucker Peavey at halftime. “I want these guys to know we’re going to go for it. We played hard and we have to play smart.”

In the third quarter Natchez tied the game when a play-action pass fooled the Panther defense and left the Natchez receiver wide-open.

The two teams traded touchdowns and were tied 27-27 in the second half.

Natchez gained the upper hand on BHS by scoring a late TD to put them up 34-27.

The Panthers tried for one more shot at the victory and got within one point on a late touchdown. However, the extra-point was missed in heart breaking fashion and gave the Bulldogs the 1-point victory.

Brookhaven returns to King Field next Friday to host the Wingfield Falcons for homecoming.

Co-Lin moves to 4-0 in division play

The Copiah-Lincoln Community College Wolves are now 4-0 in the MACJC South Division and 5-2 overall after a 41-27 home... read more