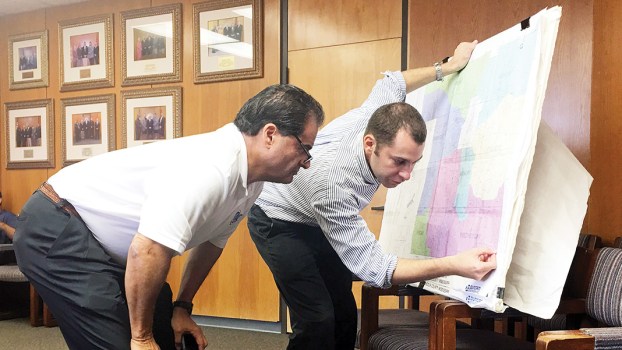 Another day, they picked up bags out of two cans at a home on New Sight Drive but didn’t see a 55-gallon drum, full of garbage, chained to the backside of a nearby tree. The pick-up men with Arrow Disposal Service Inc. have also picked up garbage out of old barbecue grills and pulled sacks out of the bed of a pickup truck backed down to the roadside. Someone on Mt. Zion Road put their garbage out in a container made of chicken wire, but left a lock on it.

“There’s five bags in there, but I can’t get to it,” said Arrow CEO Richard Urrutia, as he showed a cell phone photo of the chicken wire receptacle to Lincoln County supervisors Monday. “If you unlock your garbage, I’ll get it.”

Urrutia’s visit to the board Monday was part check-in for his company’s second week on the job after taking over trash collection in Lincoln County Oct. 1, and part plea for help. After a year of neglect by run-off trash contractor Waste Pro, Lincoln County residents have developed some curious trash habits that are making Arrow’s first two weeks on the job more difficult, and Urrutia asked the board for help.

Several addresses across Lincoln County aren’t clearly marked, and some residents who live on private drives have not brought their trash cans to the roadside, he said. There have also been problems with trash not properly bagged and canned — Arrow was hired to pick up, not clean up — and some residents appear to be missing the 6:30 a.m. deadline for putting garbage out, running out behind the Arrow trucks then complaining their home was missed.

“We had a missed pickup called in at 11:30 a.m. We weren’t finished with that route yet — they hadn’t missed it, we just hadn’t gotten there yet,” Urrutia said.

On top of weird behavior by residents and having to learn the roads and routes, Arrow has also had to play a significant game of catchup from Waste Pro, disposing of weeks’ worth of uncollected garbage at the company’s expense.

District 4 Supervisor Eddie Brown complained a home in his district had 60 bags piled up from Waste Pro misses — Urrutia said the record his drivers reported to him for a single house was 85 bags.

“I understand why the citizens are gun shy. They’ve had such poor service in the past,” he said. “We’re not perfect, but we’re working on the problem and we’re getting better.”

Urrutia urged residents to make sure their garbage is properly bagged, placed in an easily-identifiable receptacle — not in a barbecue grill — and taken to the roadside before 6:30 a.m. on pickup day. A map of all county pickup days is available online at golincolnms.com. If Arrow changes routes for an area, residents will be notified with a company door hanger that reads, “your service day has changed,” with the new day marked.

When scheduled pickups are missed, Arrow’s customer service hotline is 866-440-3983. The company’s policy is to finish one day’s route before beginning the following day’s route, even if that means the tail end of Monday is picked up Tuesday morning.

Urrutia said Arrow would come back for missed pickups reported to the hotline, but only if it was truly missed — he told supervisors one home missed on a picked-up road is indicative to a missed deadline, not a missed pickup.

“A miss, and garbage not put out, there’s a difference,” he said.

Allie Claire Townsend’s coolest memory from her reign as Miss Merry Christmas was the stares of wonder and delight from... read more