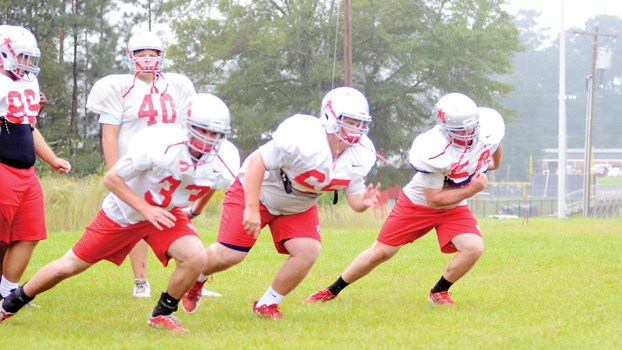 Photo by Adam Northam/Loyd Star Hornet football players practice Tuesday afternoon on the site of the proposed new football field, but must cross over the land that is currently in dispute in order to reach it.

If the heirs of a disputed estate adjacent to Loyd Star Attendance Center won’t agree on an easement across their property, the school board may take it through eminent domain.

The Lincoln County School District Board of Trustees on Monday voted 4-0 to allow Superintendent Mickey Myers to begin building an eminent domain case against Addie Johnson Bacon and the descendants of Bernice Norton to seize an approximately 300-foot strip of property that would connect Loyd Star with 13 district-owned acres off the northeast corner of campus intended to be the site of a new sports facility. The board would have to give final approval before an eminent domain case went to court, and Myers said hopes are the threat of such a proceeding will be enough to spur the Norton heirs into action.

“We can’t get a firm commitment on anything,” Myers said. “We’re optimistic this will speed up the process. We have the Loyd Star football team practicing out there now, and in essence we’re trespassing.”

Acquisition of the small tract would clear some hurdles to the construction of a proposed $1.9 million football and soccer facility on the 13-acre site, identified by Loyd Star Principal Robin Case as the school’s top facilities need. Loyd Star’s current, 50-year-old football field suffers from electrical and layout issues and takes up all the space on which the land-locked school could expand.

In addition to the project’s cost, board members expressed concern the district had no straight-through access to the property when they voted down the project 3-2 on Aug. 27. If the district took over the piece of Norton land, it could also connect the backside of campus with Jackson-Liberty Drive and move the parent pick-up line off Hwy. 550.

Eminent domain law in Mississippi requires the agency seeking a takeover to exhaust all attempts at negotiation, obtain an appraisal and notify the landowners in writing before filing the case in Lincoln County Circuit Court, where it will proceed before a judge and jury like any other court case. If the suit is successful, the landowner is entitled to just compensation before surrendering the property via quit claim deed.

The property the board is targeting is double-disputed — the Norton heirs have been unable to decide the future of their family property for several years, and they also disagree over the line separating their approximately 34-acre property with a small strip owned by Bacon.

Board attorney Jim Keith said eminent domain law would allow the board to take only as much property as needed to connect the two properties. The disputed property extends roughly 1,200 feet between the campus and Jackson-Liberty Drive, but the board is seeking only a strip of land that is 300 feet by 60 feet off the northeast corner of home plate behind the Loyd Star baseball field.

“It’s not a friendly issue,” said Keith. “It’s the step you don’t want to take, but if it’s the only step left to get access to that land, there’s nothing else you can do.”

The history of access around Loyd Star is confusing. At one point the board had a verbal easement across the property, or the board’s easement was on the 13 acres it now owns — trustees aren’t sure which is the case.

Myers said the issue is further confused by communication between the board and the Norton heirs. They approached the district seeking an easement onto a second, 40-acre Norton tract for a timber harvest that was supposed to occur in August or September — October is half over and the cutting hasn’t been mentioned again, Myers said.

“If we’re going to give them an easement to get the logs out, they need to work with us, too,” said District 2 Trustee Johnny Hart.

The Lincoln County School Board will choose its fifth member Monday after voting to put off the appointment one more... read more