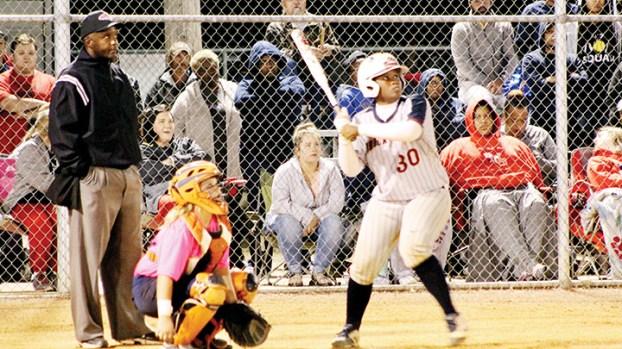 BHS’ season ends on a walk-off

Just when it looked like the Brookhaven Lady Panthers would force a third and deciding game in their series with Wayne County on Tuesday night, the Lady War Eagles used a walk-off two-run homer to take an 11-10 win in game two and end the season for BHS.

The Lady Panthers went down 18-6 in game one after a nine-run third inning put Wayne County up big.

The opening game was marred by errors as the young Lady Panther team — shortstop Kat Wallace is the only senior — looked to be nervous in their Division II Slow-Pitch South State debut. The game was familiar territory for a Wayne County club that lost in the state championship series last season.

In game one, the Lady Panthers got home runs from Lynsey Nations and CeAria Henderson. Lulu Cook hit two doubles and Madi Miller hit a triple and a single. Wallace hit a single and Kaysah Register also added two singles.

The body language for BHS flipped quickly as game two began, and the Lady Panther bats appeared to have the juice they were lacking in game one.

After a scoreless first inning, the BHS offensive attack heated up with four runs in the second and three more in the third to take a 7-1 lead.

Junior Meg Foster got the Lady Panthers on the board with a solo home run in the second inning. BHS would get consecutive singles by Cook, Angel Wilkinson, Layla Woodall, Miller and Wallace to continue the big frame.

In the third, Brookhaven got three more runs off of a three-run home run by Cook.

Brookhaven was batting first and listed as the visitor on the scoreboard, as is the procedure in the second game of a playoff series. After the top half of the fifth inning, the Lady Panthers led 8-1 and appeared to be cruising to game two as the large, partisan crowd cheered them on.

The bottom half of the inning would be disastrous, as the Lady War Eagles used walks to load the bases before using a grand slam by Morgan Slater and another RBI to cut the Brookhaven lead to 8-6.

Brookhaven padded their lead back out to 10-6 in the sixth inning after a Miller double started the inning with a baserunner.

In the Wayne County half of the sixth, the visitors from Waynesboro cut the lead to 10-9 and then loaded the bases with two outs. It appeared that Wayne County had blown the game wide open when they hit their second grand slam of the contest.

As soon as the ball left the yard, the first base umpire called the runner out at first for leaving the bag early. The inning was over, as the runner was the third out of the frame and it was like the grand slam had never happened.

Wayne County coach Jamie Powell was livid with the call, but first base umpire Grant Williamson was resolute that the runner had left early and the grand slam was nullified.

Brookhaven would get nothing in their half of the seventh inning, which set the stage for the Wayne County walk-off that sailed over the center-field fence as a light mist fell on the field.

The mood in the postgame huddle was sober as Coach Mandy Vinson addressed her team that finished with a 23-7 record.

“I’m proud of them and the way that they’ve fought all season,” said Vinson. “This is the farthest in the playoffs our team has been in a long time. They don’t have anything to hang their head about.”

Nearly the entire Lady Panther roster will transition to fast-pitch in the spring, where the Lady Panthers are coming off a 2018 season that saw them finish 22-6 and make the second round of the 5A playoffs.