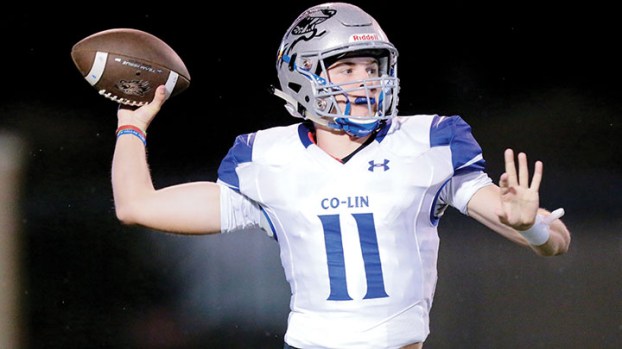 Co-Lin, Jones fight for No. 1 seed

The No. 15 Copiah-Lincoln Community College Wolves are 4-0 in MACJC South Division play after defeating Hinds 41-27 last week in Stone Stadium.

The win moved the Wolves to 5-2 overall and secured a playoff bid for Co-Lin, the first in four years.

Co-Lin is on the road Saturday, as the Wolves face the No. 7 Jones College Bobcats. Jones is also 4-0 in division play and 6-1 overall. The winner of the game will win the MACJC South Division and clinch the No. 1 playoff seed out of the south, securing a home game for the opening round of playoffs.

Kickoff is slated for 2 p.m., as the contest will serve as Jones’ homecoming game.

Jones leads the Wolves statistically going into to Saturday’s matchup with 2,718 yards of total offense compared to Co-Lin’s 2,377, with both teams utilizing a balanced passing and rushing attack.

Last week’s rushing attack was a joint effort from Rico Owens and Deion Dampier. The duo combined for 201 yards on the ground and three touchdowns on 25 combined touches. Look for the Wolves to continue that trend against the Bobcats.

Defensively, Edwin Whitlock led the Wolves with 12 tackles and three pass breakups. Swayze Bozeman, the third best tackler in the MACJC, wrapped up 10 tackles to bring his season total to 64. Taijh Alston and Tyrus Wheat also had standout games, as Alston wrapped up nine tackles, 1.5 tackles for loss, and a fumble recovery, while Wheat posted eight tackles and two interceptions.

Stetson Bennett will lead Jones at the quarterback spot. The redshirt freshman is 88-for-153 on the year for 991 yards, 11 touchdowns and five interceptions. Kalyn Grandberry leads the Bobcats’ rushing attack with 158 touches for 868 yards, while Donte Edwards has 407 yards on 83 carries. Gabe Douglas, Immanuel Jones, and Johnquarise Patterson are Bennett’s go-to receivers, as the trio has combined for 796 yards and 11 touchdowns.

On the other side, Nick Anderson and Daylen Gill, two freshman linebackers, lead the Bobcats in tackling with 43 and 31 tackles, respectively. Chei Hill is also a player to watch, as he has wrapped up eight sacks on the year.

Saturday’s meeting is the 85th meeting between the two programs dating back to 1929. Jones currently leads the all-time series 51-32-1.