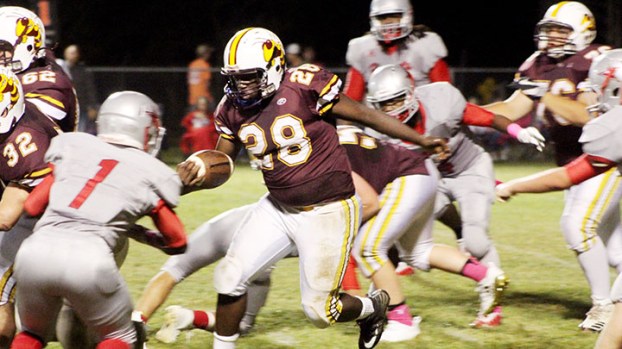 Photo by Cliff Furr Enterprise junior running back Dylan Vaughn dances through the middle of the Loyd Star defense in the first half of the Sting Bowl. Vaughn scored a first half touchdown  and was the leading Yellow Jacket rusher in a 61-22 defeat.

The Enterprise Yellow Jackets (0-8) know it will be a clash of styles when they travel to Liberty on Friday to take on the Amite County Trojans (1-8) in a Region 7-2A matchup.

Enterprise coach Brooks Burns hopes that his team will be the one who can assert their will and use their rushing attack to eat up clock and yards.

“We have to maintain the time of possession by controlling the ball on offense,” said Burns. “We need long, sustained drives that end in the end zone.”

After a loss last Thursday that saw the Yellow Jackets fumble four times in a 61-22 Loyd Star win, Burns also doesn’t want to see his team coughing the ball up against the Trojans.

“We can’t afford to have any turnovers or penalties,” said Burns.

Penalties were also a problem for the Jackets against Loyd Star as they were routinely drawn offsides by false snap counts that caught them not watching for movement of the ball.

The Yellow Jackets will rely heavily on the legs of fullback Dylan Vaughn as they attempt to grind the Trojans down. A junior, Vaughn gives his team a running threat that is best in the middle of the defense.

Dustin Prather and Jordan Stephens are the options at running the ball when the Jackets need to run to the outside. Bryce Jackson is another ball-carrier utilized by Enterprise.

Stephens led the Yellow Jackets with 126 yards rushing against Loyd Star. Vaughn also added 125 yards on the ground against the Hornets.

Defensively the game plan is simple to say, but harder to do — don’t allow any big plays.

“We can’t let them have any explosive plays, especially the deep balls,” said Burns.

To do that Enterprise will need to bottle up Trojan quarterback Derick Cosby. A 5-foot-5 sophomore, Cosby is at his best throwing on the run.

Cosby was bottled up last week in a loss to Bogue Chitto as the Bobcat secondary did a perfect job of covering his receivers down field. That — plus a strong Bogue Chitto pass rush — kept Cosby from throwing for a touchdown after throwing for 600 combined yards in his previous two games.

One aspect that helped slow down the Trojan offense last week was the play of the Bobcat linebackers. They were often the ones running full force at Cosby and making him tuck the ball and run when he had no other choice.

Linebackers and ends that Enterprise will count to do the same for them this week include White, Dakota Anderson, and Trenton Tarver.

Last season the Trojans beat Enterprise 53-20 in Lincoln County. The Trojans have beaten the Yellow Jackets by an average score of 53-9 in a seven-game Amite County win streak in the series that began in 2011.

Kickoff in Liberty is scheduled for 7 p.m. Friday.

Co-Lin, Jones fight for No. 1 seed