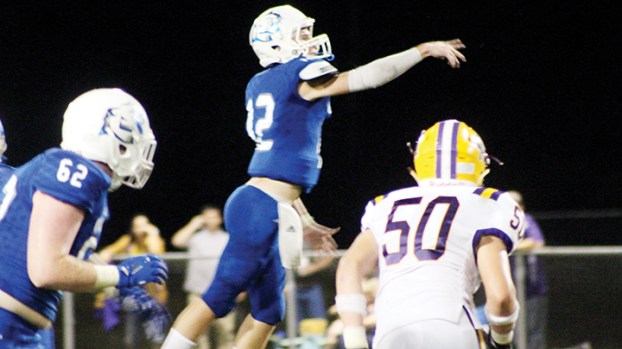 Photo by Cliff Furr/Brookhaven Academy quarterback Dawson Flowers leaves his feet to make a throw against Centreville earlier this season.

The Brookhaven Academy Cougars (6-2) conclude their regular season Friday night when they travel to Liberty to take on the Amite School Center Rebels (1-9).

With a win, the Cougars will complete their district schedule with a perfect record, as they’ve already laid claim to the MAIS District 4-AA regular season title with wins over Clinton Christian and Centreville. Those two teams play head-to-head Friday night as well.

A BA win Friday night will also help solidify their power point ranking as they move into the playoffs next week.

The power point system is used to seed the MAIS playoffs and uses a mathematic formula that rewards teams more for beating opponents with winning records. Last season the Cougars were seeded seventh and beat Central Holmes Christian in the first round before dropping a second-round game to the second-seeded Centreville Tigers.

That 2017 Centreville team was then knocked out of the third round by the Greenville St. Joseph Fighting Irish. St. Joe — seeded sixth last season — then went on to blow out Tri-County in the AA championship game.

This season, it looks like the defending champion Fighting Irish will likely be the top seed in the playoffs. Depending on how other games play out Friday night, the Cougars will likely be seeded somewhere close to the fourth spot. They could finish as high as third, but most likely won’t finish as low as fifth.

Who Brookhaven will play next week in a home playoff game will also be sorted by the seedings, but coach Ron Rushing has some idea of the likely opponents for his team.

“There is a chance we might matchup with the loser of the Oak Hill versus Marshall game,” said Rushing. “We’ve got to take care of business against Amite and play a complete game with great effort. Then we’ll worry about who we play and how we get seeded.”

BA — coming off a 55-28 win over Union Christian — is seeking to win their fourth-straight game.

Kickoff between the Rebels and Cougars is 7 p.m. in Liberty.