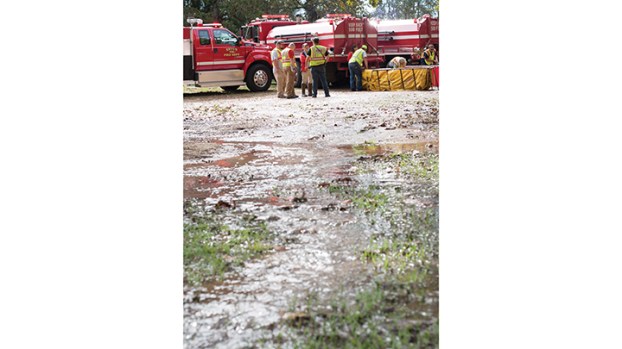 Photo by Adam Northam/More than 16,000 gallons of water flows away from the site of the Zetus Volunteer Fire Department’s water-haul test Thursday, one of the department’s last steps in creating a new rated fire district in the West Lincoln area.

They blasted the water out of a steel cannon mounted atop the pumper truck, arcing a hard cone of liquid up to batter and saturate the high limbs of an old oak at Johnson Grove Church of Christ. The fine white column disintegrated up there among the limbs and leaves, splashing down 100 feet away in a wide, wet circle around the target, an old wooden pallet.

In order to establish their new West Lincoln-area rated fire district, the members of the Zetus Volunteer Fire Department had to demonstrate they could sustain that thick jet of water at 250 gallons per minute for one hour, but the inspecting officer from the Mississippi State Rating Bureau called off the test after just 10 minutes of spray. He’d seen enough — Zetus had no trouble putting water on target and had 16,500 gallons on-scene and ready to pump.

“We knew we could pump it — the trick was getting it here,” said Zetus VFD Capt. Jonathan Alford. “Loyd Star was en route with another 3,000 gallons, but they turned back when the test was over.”

Thursday’s performance marked the first time any of Lincoln County’s eight volunteer fire departments had performed a haul test for the rating bureau. The departments in charge of the county’s five existing rated fire districts all operate in areas where water associations maintain hydrants, but in Zetus’ proposed new district — which will cover an area reaching from Hwy. 84 to Bogue Chitto Road and from Arlington Drive Southwest to the Franklin County line — there are no plugs to which the pumpers can connect.

Out there, water has to be trucked in. So the Bogue Chitto, Hog Chain and Loyd Star departments cranked up their tankers and gave Zetus an assist of nearly 20,000 gallons.

“I won’t know a grade until I calculate everything, but they did fine during the shuttle,” said Richard Parham, a field rating representative with MSRB. “They’ve been practicing, getting honed to get this efficient.”

Parham’s calculations will determine whether Zetus’ new district is established as Protection Class 10, 9 or 8 — Class 9 is common, but Zetus is hoping their new trucks, multiple fire stations and haul test scores will bump them up to a Class 8. Protection classes are graded on a scale of 10 to one, with 10 being the least-prepared zone and Class 1 the best and most rare.

The new Zetus district could result in discounted home insurance policies for residents within its boundaries. Insurance prices will vary depending on the type of structure and material.

“Without the support of the community, and people participating in our fundraisers, making donations, we can’t buy the equipment, the trucks, the fuel to do what we’re doing,” said Zetus VFD Chief Dale Anding.

Zetus and the other VFDs need more support — not just cash, but manpower.

Lincoln County Emergency Management Director Clifford Galey said all eight departments need more volunteer members, especially during the day. He encouraged anyone who worked nights, or anyone who works turn-arounds or offshore jobs that has them gone and then home for weeks at a time, or anyone at all interested in volunteering, to contact their local department.

“We’ll welcome you with open arms,” Galey said. “We’ll be glad to take you in and get you trained. We all have programs for up-and-coming firefighters.”

Galey pointed out experience as a firefighter is not required to join a VFD, and the departments don’t just put out blazes — they respond to accidents, medical emergencies, search and rescue operations, disaster relief and other situations. The departments could especially use someone with medical training, he said.

The recipes have come down through the ages, and he calls them what he’s called them all his life. “Mamaw... read more