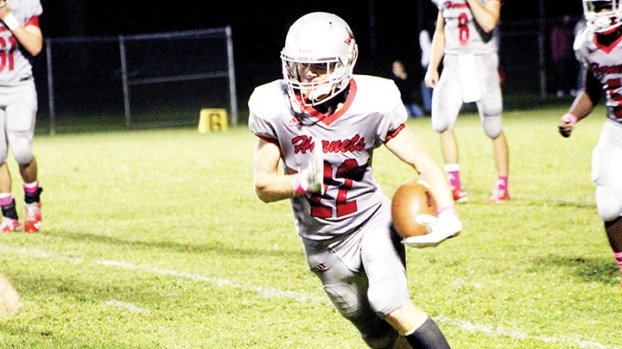 Photo by Cliff Furr Loyd Star senior Zach Nevels makes a cut for open field against Enterprise. Nevels has rushed for 546 yards in 2018 and scored six touchdowns for the Region 7-2A champion Hornets.

It’s almost over. The final week of the 2018 high school football regular season is upon us for nearly every school in the area. Brookhaven High still has another game after this week and Brookhaven Academy gets the post-season started this week with a home playoff game — but for the other six teams in the area and Copiah-Lincoln Community College — this week is it for the regular season.

Region 7-2A race is finished

It’s all over but the shouting in the county 2A region as Loyd Star — who was off last week —has the region championship wrapped up with a 3-0 record.  The Hornets (6-3) will honor their seniors this week before taking on West Lincoln (3-6) in the regular season finale on W.E. “Sambo” Smith Field.

It’s a testament to the depth of the team and coaching staff that the Hornets have had at least five starters miss major time due to injuries and still finished top of the division. Loyd Star will host Mize (3-7) in the first round of the playoffs in two weeks.

Bogue Chitto (5-5) is also hosting a playoff game this season after locking up second place with a 55-30 win over West Lincoln this week.

Their stable of skill players is what makes this Bobcat team special. You can’t just key in on stopping one player and Bogue Chitto head coach Gareth Sartin — an experienced play caller — knows that.

The likely first-round opponent for the Bobcats will be Madison St. Joseph (5-5). St. Joe finishes their regular season this week with Pisgah.

Bogue Chitto wraps up the regular season with a matchup against Enterprise on Friday. Enterprise (0-9) will honor their senior class before they play the Bobcats.

The running back duo of Enrico Price and Michael Brothern was formidable for the Bears against Bogue Chitto, but the passing game has been set back this season by an injury to quarterback Travis Hall early in the year. Freshman Ashtin Auttonberry has gotten plenty of on the job training at quarterback this season and it should excite Bear fans that he and Price are both just freshmen.

Enterprise also starts a freshman quarterback in Matthew Burns. The Yellow Jackets are coming off a 58-30 loss in Liberty last week to the Amite County Trojans. No one takes the Jackets for granted, despite their winless record. The first thing mentioned by their opposing coaches is always how physical Enterprise plays along the line and how hard their effort is every week.

The Wesson Cobras (4-5) will take on the Jefferson Davis County Jaguars (6-4) on Thursday. The game will be played at Stone Stadium on the campus of Co-Lin and has been moved up from the original date of Friday.

The Cobras are finishing their second season in the SEC of their classification, Region 8-3A. The defending 3A state champs, Jeff Davis is 2-2 in the division and will shockingly not host a first-round playoff game after losing to Seminary and Columbia.

Any hopes for hosting a first-round playoff game for coach Jesse Anderson and his Lawrence County Cougars (7-3) comes down to a must win game in their finale against Poplarville (8-1). The Poplarville Hornets are one win away from their third straight season of being unbeaten in division play. The Hornets last loss a region game in 2015 to Purvis.

A Lawrence County win will give the Cougars the division title despite their 41-20 loss to Greene County last week. If the Cougars lose and finish third in their division, they’ll likely play at Lanier in the first round. It wouldn’t be surprising to see the four teams from Region 7-4A of which Lawrence County is a member sweep the four teams from Region 6-4A in the first round of the playoffs.

5A Brookhaven High (6-3) has two regular season games left, a trip to Ellisville to play South Jones (5-5) this week and a home game against West Jones in two weeks. Brookhaven handled Wingfield 35-21 in their homecoming game this week.

Brookhaven and Natchez are tied in the division standings with identical 3-2 records. The Bulldogs hold the tie breaker over BHS after a one-point win earlier this season. Brookhaven would like to avoid being in fourth place as that would slate them to travel to undefeated Hattiesburg in the first round of the playoffs.

The Brookhaven Academy Cougars (7-2) will host an opening round playoff game for the second consecutive year as they take on the Marshall Academy Patriots (3-7) out of Holly Springs on Friday.

Marshall has always been a solid MAIS program, in fact it was the Patriots that Brookhaven Academy defeated in the championship game the last time BA won a state title in 2012.

The Cougars captured their district championship on Friday night with a 35-14 win over Amite School Center.

The forecast is for Saturday to be a real beauty as the Wolves (5-3) close out their regular season on Saturday against Southwest (1-7) for homecoming in Wesson. The day will be filled with festivities such as a 5K, the induction of the athletic hall of fame class, a tailgate party, and the presentation of the homecoming court beginning at 2:30 p.m. followed by the football game thirty minutes later.

Co-Lin lost 28-23 to Jones in Ellisville on Saturday. That means the Wolves will finish as the MACJC South Division runners-up and travel to Scooba on Nov. 2 for a playoff matchup with No. 1 ranked East Mississippi.

The postseason begins for all of the MHSAA area cross-country teams Wednesday when region meets take place at Choctaw Trails... read more