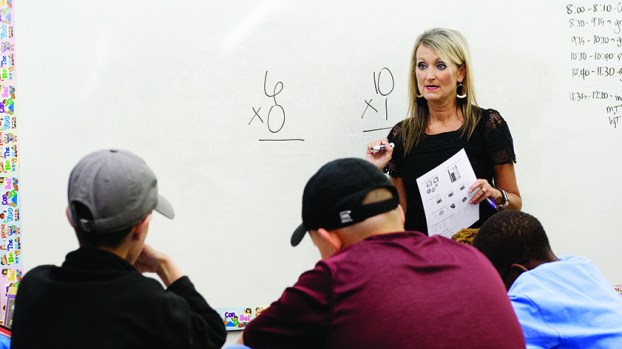 All mixed together — Oct. is Dyslexia Awareness Month

Dyslexia gives itself away, if you know where to look.

Children with the disability will have difficulty rhyming, associating sounds with symbols and trouble identifying and understanding signs. Word retrieval can be difficult, directions hard to follow and unfamiliar words a mystery. Children already in school tend to excel at math but struggle with reading, and will write letters and numbers backward — the tell-tale sign of dyslexia.

“A child with dyslexia will see a bunch of letters all mixed together, all running together,” said Millie Porter, a speech-language pathologist. “They see it as a whole instead of individual words, and a lot of the time they see it from right to left, instead of left to right. When a dyslexic child sees an ‘R,’ he may assume it’s for ‘red’ or ‘rabbit’ — they go with the first thing they think about.”

Porter owns and operates The Reading Nook in Brookhaven, a private school and therapy provider that serves 45 students with varying learning disabilities. Forty of her students are dyslexic, enrolled there by parents frustrated with the lack of options for dyslexia services in public schools.

October is Dyslexia Awareness Month, so declared by the International Dyslexia Association. It doesn’t come with the ribbons and colors and nationwide coverage associated with Breast Cancer Awareness Month, also in October, but the information is out there, and Porter wants parents of children with dyslexia to equip themselves with the knowledge and confidence to confront the disability.

“I think most parents are confused by it — people tend to think dyslexia is an immaturity, or that the children will just catch up,” she said. “But it’s serious, and it needs early intervention.”

Dyslexia is a common learning disability, affecting an estimated 43 million Americans. Almost 4 percent of students have dyslexia, while the disability is thought to be the barrier for between 70 and 80 percent of students who display lagging reading skills. It is believed to be both genetic and environmental.

Dyslexia is a neurocognitive disorder that causes struggles with decoding, word recognition and spelling due to the differences in the way the brain sequences sounds in early development, making it difficult to later associate sounds with visual representations — when other children learn to sound out the “C” in “cat,” dyslexic children don’t understand the association.

Porter and other dyslexia specialists have a toolkit for educating children with dyslexia — they use bigger fonts on worksheets, space out words and teach cursive writing (cursive writing makes words tight units, with starting and stopping points, rather than a collection of letters). They also stress individual attention and work in small groups.

Small groups and one-on-one time is a luxury The Reading Nook can provide. Public schools don’t have the time or resources to address dyslexia as thoroughly.

Dyslexia is not tied to intelligence — Porter says dyslexic students often have high IQs — so dyslexic students do not meet thresholds for special services and the resources tied to those programs. Dyslexia falls under general education and is dealt with in regular classrooms.

Dyslexic students can get 504 plans, a school-developed program meant to provide students with disabilities access to the same education as their peers and required by federal law. But 504 plans are not the same as plans developed under the federal Individualized Education Program and do not come with one-on-one assistance.

A state law written in 2012 by District 104 Rep. Larry Byrd, a Petal Republican, requires schools to screen all students for dyslexia in the spring of their kindergarten years and again in the fall of their first-grade years.

But the screening is not an actual dyslexia test — it’s a questionnaire filled out by teachers based on their observations in the classroom. Public schools typically do not perform dyslexia evaluations, said Richelle Ratcliff, curriculum director for the Lincoln County School District.

“If a child fails that screener, we’re required to notify the parents,” she said. “We only do the state-mandated screening. It’s not a test, just a screener that identifies children who may be at risk. Exhibiting the characteristics doesn’t mean they have dyslexia.”

MDE’s handbook recommends a variety of teaching strategies be carried out in one-on-one or in small groups, such as providing dyslexic students with books on tape or using “screen reader” software that reads assignments aloud and highlights key words. The handbook advises students be allowed to record lectures, and says to encourage students to find alternatives to reading original works.

The Lincoln County School District does not have any dyslexia specialists on staff. Neither does Wesson Attendance Center. It is unclear how the Brookhaven School District educates students with dyslexia, as superintendent Ray Carlock and special services director Brandy Myers did not immediately return messages seeking comment for this story.

For Dyslexia Awareness Month, Porter recommended the parents of children with dyslexia, or preschool or kindergarten children who are exhibiting signs of dyslexia, educate themselves — resources are available online at numerous sites, like the International Dyslexia Association at dyslexiaida.org or The Child Mind Institute at childmind.org.

With the Lincoln County landmark up for sale, local historians are unsure of the Coffee Pot’s future. That’s why the... read more