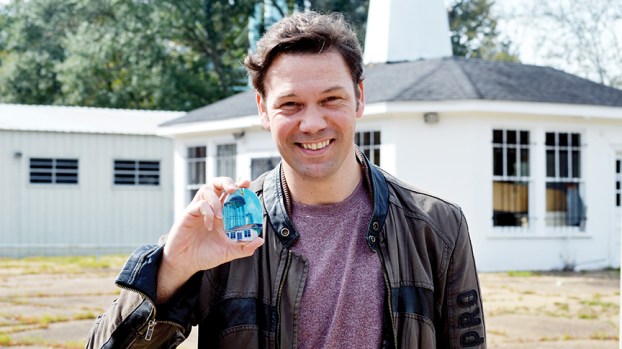 Photo by Donna Campbell Brookhaven artist Derek Covington Smith donated the use of his painting of the historic Coffee Pot landmark for this year’s Lincoln County Genealogical and Historical Society’s Christmas ornament.

With the Lincoln County landmark up for sale, local historians are unsure of the Coffee Pot’s future.

That’s why the Lincoln County Genealogical and Historical Society decided to immortalize it as a Christmas ornament.

LCGHS member Tammie Brewer said, “We wanted to create a keepsake. The Coffee Pot is considered the South’s first fast food establishment, which was built and operated by the Carruth family for many years.”

Brookhaven artist Derek Covington Smith donated the use of his acrylic painting of The Coffee Pot to use for the ornament.

Constructed in 1931 by James J. Carruth and his wife, the two-story stucco Coffee Pot Inn was Brookhaven’s first drive-in restaurant, according to the Mississippi Department of Archives and History. The building also served as the Carruth family home and as a Greyhound bus stop in 1933.

In 1936, Eddie Hinnant played a piano on top of the building nonstop in an attempt to break his record of 110 consecutive hours.

Smith had painted it earlier this year as part of his series of Brookhaven landmarks. Besides the Coffee Pot, he’s completed likenesses of the Art Studio building, New Sight Baptist Church’s original building and Dude’s Hot Biscuits. He’s working on a painting of Brookhaven High School.

Brewer approached him a few months ago about painting The Coffee Pot to use for the ornament.

“It just so happened I already had a painting of the Coffee Pot that would fit in this oval size and it worked out perfect,” he said. “I was more than happy to do that. Anything for this town.”

The ceramic ornaments are $25 and can be purchased at the LCHGS museum at 227 South Church St. when it’s open on Tuesdays and Thursdays from 11 a.m. to 3 p.m. Only 150 ornaments were created, Brewer said.

Money from the fundraiser helps supplement the museum’s budget of $10,000 per year, which includes utilities, maintenance and insurance.

“All of the proceeds of the ornament will be used for the society and museum,” Brewer said. “It will help sponsor numerous programs for the public and members-only events throughout the year, as well as the upkeep of the museum.

“We just completed a huge renovation project at the museum, thanks to grants from the Brookhaven Lincoln County Tourism Council, Silver Cross Foundation and the Brookhaven Trust. We now have new paint, inside and out, a new roof and some minor repairs were done to the building. We now hope to get to work on the landscaping.”

This is the LCHGS’s third ornament to produce.

The first ornament depicted the Warren Avenue Bridge, a wooden structure that sat at the intersection of South Railroad and East Warren avenues for more than a century. Built in 1903, the historic bridge was pictured on the 3-inch round ceramic ornaments. Only 100 of the commemorative ornaments were ordered and sold out in one afternoon.

The second ornament featured the Mary Jane Lampton Auditorium, which was constructed during the years leading up to World War I and was originally part of Whitworth College. Dr. Kim Sessums’ original sketch of the building was used. A few of those ornaments remain and are for sale for $15 each at the museum.

The goal behind the ornament sale is to help keep local history alive, she said.

“It’s to first raise funds for the society and museum but to also raise awareness of the society and preserve history,” Brewer said. “LCHGS would like to see its fundraiser become a regional holiday tradition, and the organization expects to continue honoring area landmarks on Christmas ornaments for years to come.”

Students from Brookhaven Music and Sound Co. will be sharing some spooky tunes as the annual Rock Academy Halloween show... read more