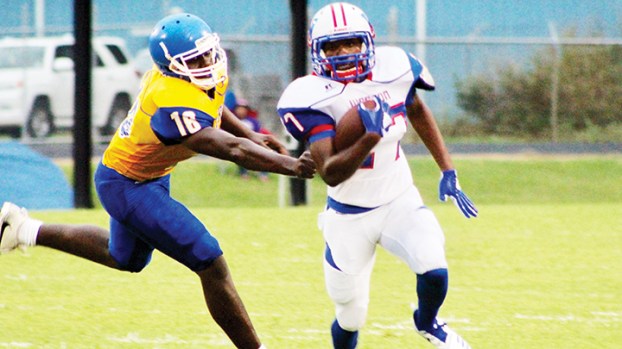 Photo by Cliff Furr Wesson senior running back Jaquavion Harris fights for yards against Crystal Springs. Harris will be among the group of seniors honored prior to the game tonight in Wesson against Jefferson Davis County.

Wesson headed back down to 2A district

Christmas came early for the Wesson Cobras on Tuesday when the MHSAA released classification numbers for the next round of redistricting that will take effect for the 2019-2021 seasons.

The fans, coaches and administrators of Wesson had been crossing their fingers, toes and snake tails hoping that their team would move back down to the 2A classification after spending the last six seasons in 3A.

When the final count had been tallied, the Cobras got the good news they had been hoping for. They will move back down to 2A — barely. With 279 students in grades 9-12, the Cobras are the largest 2A school in the state, just slipping into the lower division by edging out Clarkdale High School, which had 283 students in high school.

The region realignments will come out later this month, but it seems natural the Cobras will join Region 7-2A with area rivals Bogue Chitto, Loyd Star, Enterprise and West Lincoln.

That means tonight’s home game against Jefferson Davis County (6-4) will be the final 3A football game for the Cobras (4-5) for at least the next two years.

The problem for Wesson hasn’t necessarily been the fact they can’t compete in 3A, it’s been the monster of a football region the Cobras have belonged to for the last two years.

Defending 3A state champ Jefferson Davis, Seminary, Columbia, West Marion and Tylertown make up a murderers’ row for any school, much less one of the smallest schools in the classification.

When the Cobras first moved up in 2012, they were playing in a division with schools such as Jefferson County, Crystal Springs, Hazlehurst and Franklin County. Good teams, but nothing compared to their current region.

The game tonight against Jefferson Davis had been originally scheduled for Friday night, but was moved up due to Copiah-Lincoln Community College hosting homecoming on Saturday along with other events in the community that were scheduled for Friday.

The Cobras will honor their 13-man senior class prior to playing the Jaguars.

Jefferson Davis — who is in their second year of existence following the consolidation of Prentiss and Bassfield — won the 2017 3A state championship with a 36-7 victory over Yazoo County.

Jeff Davis had a 14-game winning streak broken when they took their first loss this season, 42-38, to 5A Wayne County.

The Jaguars are 2-2 in the region with wins over Tylertown and West Marion, and consecutive defeats over the last two weeks to Columbia (14-12) and Seminary (20-14).

Kickoff is scheduled for 7 p.m. in Stone Stadium on the campus of Co-Lin.