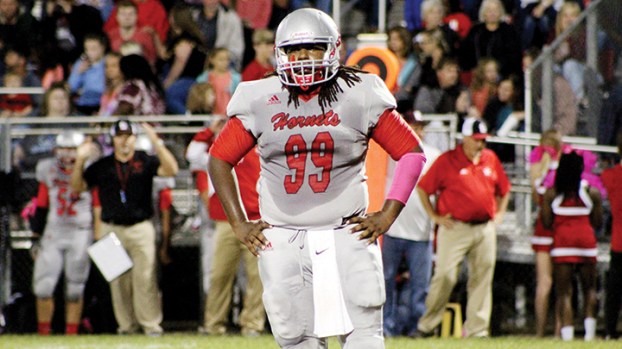 Photo by Cliff Furr/Loyd Star defensive lineman Zabien Price is among the group of Hornet seniors that will be honored prior to the game tonight against West Lincoln. The Hornets and Bears kick off at 7 p.m. on W.E. “Sambo” Smith Field.

The Loyd Star Hornets (6-3) cap off their Region 7-2A championship regular season Friday night with a home matchup against the West Lincoln Bears (3-6).

Last season, this game was the one that decided who would finish second in the division, as the Bears held off the Hornets for a 28-22 victory on their home field.

This season, both teams are firmly rooted in their playoff positions already, as the Hornets will host Mize next Friday in the opening round and the Bears will travel to Pelahatchie.

It will be senior night for the Hornets, as they honor a class that has already won the most regular season games for a Loyd Star team since the 10-2 record posted in 2009.

The Hornets are coming off a bye week and the Bears dropped a 55-30 home game to Bogue Chitto last week.

Kickoff is scheduled for 7 p.m. on W.E. “Sambo” Smith Field.

Cougars host Marshall in first round of playoffs

The Brookhaven Academy Cougars (7-2) host the Marshall Patriots (3-7) out of Holly Springs on Friday in a MAIS AA... read more