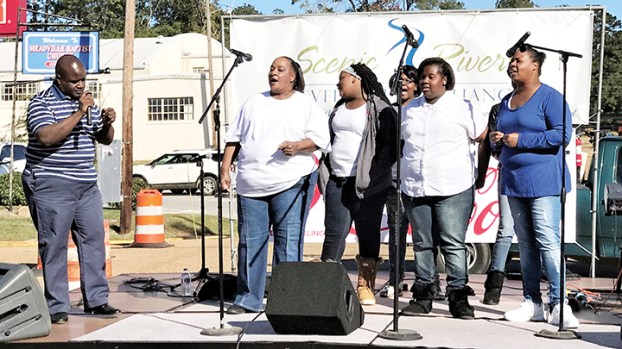 Photo submitted A group sings during this past year’s Homochitto River Festival.

For the second annual cooking competition during the Homochitto River Festival Saturday, teams can compete in wild game, barbecue, Cajun, soul and dessert. And while prizes, trophies and bragging rights go to the champions, it’s the judges and the 200 ticket-holding tasters who will be the biggest winners.

Teams can enter up until the day of the event — registration is open from 7:30 to 9:30 a.m., said Rhonda Huff, municipal director of the Franklin County Chamber of Commerce. It’s $25 per team for one category and $15 each for any additional categories entered. Teams are judged on tent decorations, too, she said.

Individuals can purchase tickets to taste samples from the teams’ offerings. Those tasters will vote for their favorite dishes as well. Tickets are $10 and only 200 are available for purchase.

The festival started about five years ago as a way to grow the economy and increase sales tax revenue. Huff said it’s been wildly successful, pulling in estimated crowds of more than 10,000 people to an event held in a county of just 8,000, according to the 2010 Census. That same census put Meadeville at just over 400 people.

“It started out very small and it has grown every year,” she said.

Besides the food competition, the family-friendly festival includes entertainment on two stages, more than 60 vendors, a kids’ play area, a pancake breakfast, and a 5K and kayak race.

The National Weather Service is forecasting a sunny day with a high in the low 70s.

“It’s supposed to be a beautiful day Saturday, at least partly cloudy at the most,” Huff said.

Franklin County native and banjo picker Larry Wallace has compiled a lineup so large it takes two stages to hold it all.

Wallace considered dozens of acts for the Showcase Stage — also called the West stage —before narrowing it down to 10.

The Showcase Stage is located under the traffic light at the intersection of Main and Walnut streets. Entertainment starts at 9 a.m. and features three headliner acts throughout the day — Dexter Allen at noon, Ace Cannon at 1 p.m. and Parish County Line at 5:30 p.m.

Saxophonist Ace Cannon has backed up Elvis Presley, Jerry Lee Lewis and Charlie Rich and is a member of the Rock and Soul Hall of Fame, Rockabilly Hall of Fame and the Mississippi Musicians’ Hall of Fame.

Allen, of Crystal Springs, is a blues, R&B, soul, and funk singer that has appeared as a guitarist in the James Brown biographical move, “Get On Up.”

The East Stage, located under the traffic light at the intersection of Main and Edison streets, will feature several local acts beginning at 9 a.m.

Those who want adventure can register for the Homochitto River Race and 5K Run, which will start at Camp Ridge Point in Eddiceton on the Homochitto River at 8 a.m. Competitors can choose to participate in a five mile canoe/kayak race from Ridge Point to Hwy. 98 Bridge, a 5K run or both. Registration fee is $25 for the 5K, $25 for canoes or kayaks (single paddlers only), or $40 for both (there will be an added $5 charge for day-of registration).

Other events planned at the festival include:

• Artwork from local artists on display at the Franklin County Library starting at 9 a.m.

• A pancake breakfast for $8 a plate served at Los Parrilleros starting at 8 a.m. with Spiderman and Dora the Explorer available for photos.

• A pet parade with registration at 9 a.m. and parade at 10 a.m. Categories include Best Costume, Cutest, Owner Look-Alike, Most Unusual and Best in Show. The entry fee is $10 per pet.

All events will be located in Downtown Meadville in the courthouse proximity. For more information call 601-341-2262 visit www.franklincountynow.org.