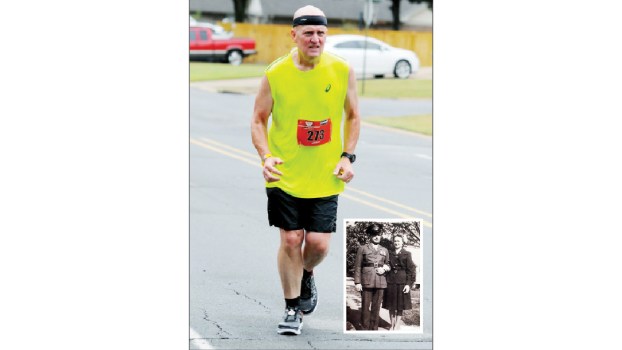 Photos submitted Dr. Jimmy Magee, a Brookhaven native, trains for the 43rd annual Marine Corps Marathon, which will be held Sunday morning in Washington, D.C. Inset: The late Kenneth and Marilyn Miller Magee of Brookhaven. Kenneth Magee fought in the Battle of Iwo Jima in 1945 with the 5th Marine Division.

When Dr. Jimmy Magee stands below the U.S. Marine Corps War Memorial in Washington, D.C., looking up at the 32-foot likenesses of the Devil Dogs who raised the flag atop Mt. Suribachi during the Battle of Iwo Jima, he sees his father.

The late Kenneth Magee of Brookhaven wasn’t one of the six Marines immortalized in Associated Press combat photographer Joe Rosenthal’s famous photo, the men who live on in bronze atop the massive granite block in the nation’s Capitol. But he was there, fighting in the black sands with the 5th Marine Division for five weeks in one of mankind’s most savage battles.

On Sunday, his son, Dr. Jimmy Magee, will run to honor his memory, and the spirits of all the Marines who fought there, in the 43rd annual Marine Corps Marathon.

“This is just a meaningful thing for me, to think about what my father and these guys went through,” said Magee, a professor of pediatrics at the University of Arkansas for Medical Sciences. “I contend we don’t appreciate the sacrifices they made — not nearly enough. Running 26 miles isn’t any fun, but there was nothing fun about fighting on Iwo Jima.”

Magee will run the MCM Sunday, beginning at 7:55 a.m. It’s only his second marathon, and he’s been training — running 50 miles per week — since February. The event draws an estimated 30,000 runners from every state and more than 60 countries, and runners are chosen by lottery.

The MCM begins on Route 110 between the Pentagon and Arlington National Cemetery and takes runners on a 26.2-mile tour of some of the city’s most historic places, with runners passing by the George Washington Memorial, through Georgetown, down Potomac Parkway, past the Kennedy Center, past the Lincoln Memorial, Martin Luther King, Jr. Memorial, the National Mall, Korean and World War II memorials, the Smithsonian, the Holocaust Museum and other famous locations.

The route ends with an uphill climb — the Marine Corps way — to end at the U.S. Marine Corps War Memorial. Those who successfully complete the entire marathon are awarded the Eagle, Globe and Anchor finisher medal.

“I just want to finish — to cross the line,” Magee said. “I’ve been running since I was about 40, and I’ve always looked at this marathon. It’s always been meaningful to me that this race ends at the memorial.”

Magee’s father was a member of the 5th Marine Division, which hit the beach at Iwo Jima on Feb. 19, 1945, the first morning of the battle. The marines took so many causalities, the division’s reserve unit had to be committed by the afternoon. When they pulled out five weeks later, the division had lost 2,482 killed, 6,218 wounded and 19 missing in action.

The senior Magee was wounded twice and saw most of the platoon around him wiped out, but he made it back to Brookhaven to his wife, Marilyn Miller Magee, and life beyond.

Dr. Magee is a 1978 graduate of Brookhaven Academy, and his wife — Donna Hemphill Magee — is a 1979 Ole Brook grad. He practiced pediatrics in Brookhaven from 1989 to 1995 before returning to Conway, Arkansas, to work for the university’s children’s hospital.

His sister, Sue Magee, still manages the family farm in the Hog Chain area, where the Magees get together every year. They still visit Brookhaven every few months, mostly to check in on Donna’s father, 95-year-old retired educator Don Hemphill, who did his own part to end the Second World War by landing on Omaha Beach on June 6, 1944.

Organizers of the annual dinner and program held to commemorate Veterans Day are asking those attending to wear red in... read more