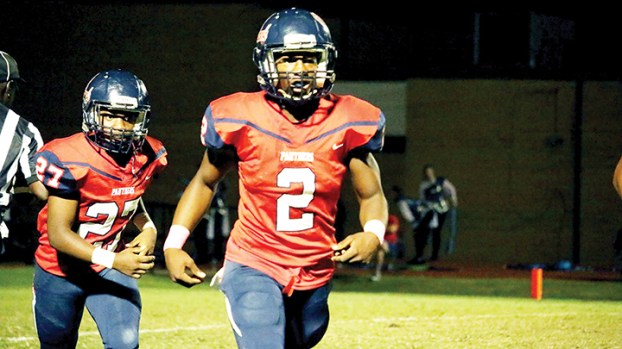 Photo by April Clopton/Brookhaven High sophomore running back No. 2 Gabe Burnett exits the field against Wingfield earlier this season. Burnett averaged 13 yards per carry and scored three times in a 41-27 win over South Jones last week.

Gabe Burnett saw his team needed him on Friday night at South Jones.

A sophomore running back, Burnett stepped up in a big way, as he rushed 13 times for 169 yards and three scores in a 41-27 win over South Jones. For that performance, Burnett has been named The Daily Leader Offensive Player of the Week.

Burnett saw junior starting running back J.Q. Edwards take off his knee brace on the sideline and knew his team needed him. Edwards injured his knee late last season and has been building back up toward the shape he was in when he rushed for 1,158 yards as a sophomore in 2017.

“I knew that we had to run the ball well against South Jones to control possession, so when J.Q. went out I knew that I was going to have to step up,” said Burnett.

Burnett has always been comfortable in his role of understudy. Last season as a freshman, Burnett got 12 carries and rushed for 78 yards and one touchdown. He got to play behind senior Duke Leggett and Edwards. Leggett rushed for 1,525 yards and 21 touchdowns for the 11-2 Panthers.

“The last two years have been a great chance for me to learn the position from two really good players,” said Burnett.

When he was at Alexander Junior High, Burnett was focused on playing safety and carried the ball sparingly.

With Brookhaven clinging to a lead against South Jones late in the fourth quarter on Friday, Burnett scored his final TD of the night at a crucial time.

The Braves had just scored to cut the lead to one touchdown. An unsuccessful on-side kick had given BHS the ball at midfield.

Burnett got the carry from the 30-yard line and raced past the South Jones defense to put BHS back up by two scores and essentially end the Brave threat. He averaged 13 yards per carry in the game.

“The offensive line executed that play perfectly and I just ran as hard as I could,” said Burnett. “All I was thinking about was beating the defensive backs to the end zone.”

The big night by Burnett was the first time that a BHS running back has rushed for more than 100 yards since Edwards did it against South Pike on Aug. 31.

A completely new offensive line has grown up during the season as they’ve gained experience and gelled.

Burnett says the entire team has come together as they’ve battled through injuries this season.

“I won’t say we’re 100 percent healthy as a team, but we’ve got some tough guys that are fighting through it to give everything for each other every week,” said Burnett.

Burnett is the son of Debonee Dixon and Raymond Burnett.

Looking ahead to their matchup with West Jones this week, Burnett says it will take that entire team effort to beat the Mustangs.

“They’re one of the fastest defenses we’ll see this year,” said Burnett. “Our coaches have a game plan and it’s up to us to go out and get it done.”

Nevels takes down a dozen rushers

Zach Nevels grew up with four older brothers. He didn’t really have a choice but to be tough. On Friday... read more