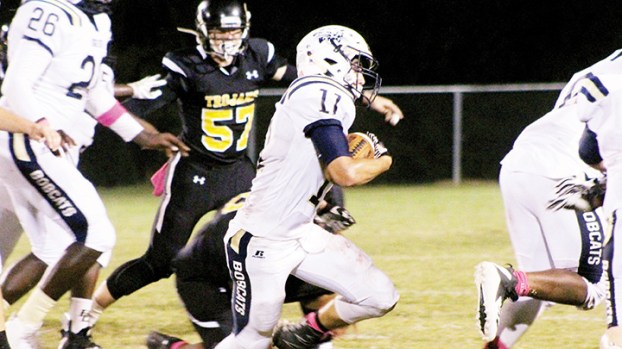 Photo by Cliff Furr/Bogue Chitto sophomore running back Owen Anderson looks for room in the Amite County defense. Last week in a 53-22 win over Enterprise Anderson rushed for two scores and also had a touchdown catch for the Bobcats.

Playoff football is coming back to Troy Smith Field, as the Bogue Chitto Bobcats host the Madison-St. Joseph Bruins on Friday night in the opening round of the MHSAA 2A State Playoffs.

The Bobcats finished 3-1 in Region 7-2A, with their only loss coming to Loyd Star in The Possum Bowl. Last week, the Bobcats topped the half-century mark for a second straight game in their regular-season closer, winning 53-22 over Enterprise.

In that game, senior running back DaMarcus Godbolt led the Bobcat ground attack with 151 yards on 11 carries and one score. Sophomore running back Owen Anderson added 88 yards rushing on nine carries and scored two touchdowns. For the season, Anderson has rushed 89 times for a team-leading 715 yards and eight scores. Godbolt has run 68 times for 671 yards and three touchdowns.

Sophomore quarterback J.T. McCaffrey went 3-of-5 passing against Enterprise for 116 yards and three scores. Anderson caught one pass that went for 40 yards and a touchdown. Junior wideout Zach Upkins had two catches for 76 yards and two scores.

In St. Joe the Bobcats will be facing the type of team they don’t see much in the local 2A region — an opponent that passes more than they run.

St. Joe comes in averaging 160 yards per game through the air and 92 yards per game on the ground. Senior quarterback Daniel Clarke leads the Bruin offense with 1,504 yards passing and 14 touchdowns in 2018. Clarke has also thrown 10 interceptions.

It’s a little surprising that the Bruins don’t employ a ground-and-pound offense due to who their head coach is.

First year St. Joe leader John Bond is a name that is familiar to longtime state sports fans. Bond set records as a running quarterback at Mississippi State in the 80s, as he directed the wishbone for head coach Emory Bellard. Bond is still the only quarterback in Bulldog history to go 4-0 versus LSU.

The only coaching experience Bond had prior to this season was a short period spent serving as a graduate assistant for Jackie Sherrill in Starkville. Bond had previously worked in the construction industry and was hired to replace former St. Joe head coach Todd Lott in late May.

St. Joe finished third in Region 6-2A behind Pelahatchie and Pisgah. The Bruins had four regular season games against MAIS competition, as they were beaten badly by Jackson Prep and Jackson Academy. They also lost to Canton Academy and beat Tri-County Academy.

The Bruins punched their playoff ticket in the second-to-last game of the regular season when they beat Puckett 27-0. They had also picked up another district win earlier in the year with a 23-22 victory over Mize.

In Pisgah the Bobcats and Bruins have a common opponent. Late in the season, the Bobcats went to Pisgah and lost 54-26 to the Dragons. Last week, the Bruins traveled to Pisgah themselves and came away with a 38-21 defeat.

“They’ve got several skills guys that they do a good job of spreading the ball to,” said Bogue Chitto head coach Gareth Sartin. “Their receivers are big and do a great job of making explosive plays.”

Senior receiver Kiland Harrison is the go-to pass catcher for St. Joe. Harrison has made 55 grabs for 855 yards and 13 touchdowns this season.

The Bogue Chitto defense does have experience and success against passing-oriented offenses in 2018. Against Amite County, the Bobcat defense was outstanding in shutting down what had been a high-flying Trojan passing game on the way to a 49-8 Bogue Chitto win.

That effort was led by a strong Bobcat pass rush that featured players such as Godbolt, Warrick Cook and Tyler Nehlig harassing the quarterback.

Sartin hopes his pass rush can harass the St. Joe passing game on Friday night, but he also expects to see a strong rush from the Bruin defense as well.

“They play an odd front and like to mix up the looks and put pressure on you,” said Sartin.

A win would move Bogue Chitto on to the second round of the playoffs for the first time since the 2012 team went 13-1 and made it to the 1A South State Championship.

The Bruins and the Bobcats kickoff at 7 p.m. on Friday night.

Lawrence County invades Florence for 1st round showdown of playoffs

The Lawrence County Cougars return to the playoffs after a one-year absence on Friday night when they travel to Florence... read more